Overnight, Hubble got our first data on perhaps the most spectacular Voorwerpje host galaxy, the merging system UGC 7342. We have to wait until almost the end of the year for what we really wanted to see, the ionized gas. The telescope has particular time pressure in some parts of the sky (as if it doesn’t have extreme time pressure on everything people want to do with it), so we split the two sets of images to fit the schedule better. This time, we got data in WFC3 for two medium-width filters in the orange and deep red, selected to be essentially blind to emission from the gas. These will be used to subtract the contribution of starlight from the gas images, so we can analyze the gas properties cleanly. The emission-line images use the older ACS camera, which has a set of tunable filters which can isolate any optical wavelength we need. They come at year’s end, because we have to specify a particular range of orientation angle of the telescope to fit all the gas in their 40×80-arcsecond filter field. That, plus the requirement that the solar arrays can face the Sun directly, gives us a restricted time window.

And here is a first look at the Hubble images, warts and all. With only the two filters in orange and deep red, the color information we get is pretty muted. Here’s the whole galaxy, shrunk 4 times from the original pixel scale to fit: 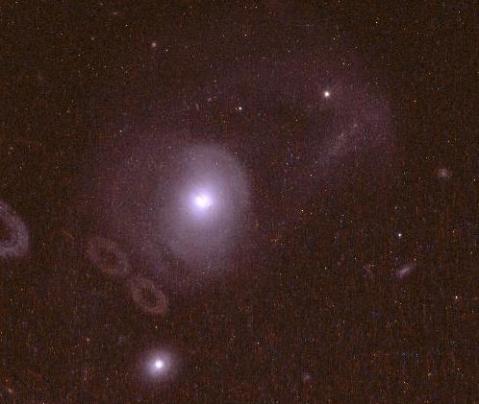 This show the companion and tidal streamers of stars. UGC 7342 itself shows shells of stars, which can be formed when a lower-mass disk galaxies merges with a more massive elliptical. With some additional velocity information, those might be able to give a time since the merger (with some tailored simulations). The elliptical reflections are from bright foreground stars outside this trimmed view; the emission-line images will at least have these in different places, using a different camera and different telescope orientation.

Zooming in 4 times to the nucleus shows that UGC 7342 has complex dust lanes crossing in front of the core. These are perpendicular to the directions where we see that distant gas is ionized by radiation from the nucleus, which is pretty common. The fact that the dust (and almost certainly associated gas) wraps at right angles to most of the structure in the galaxy is another indication that a merger took place recently enough that the situation hasn’t settled down into a long-lasting remnant. 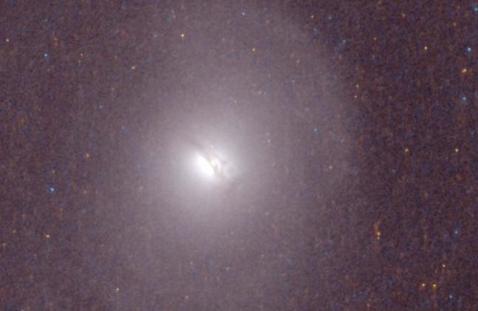 Next up? The scheduling windows for SDSS 1510+07, NGC 5972, and the Teacup AGN all happen in overlapping spans from June to August. Bring on the bits!