The first Radio Galaxy Zoo paper has been accepted by the Monthly Notices of the Royal Astronomical Society (MNRAS) and is available today on astro-ph.  The paper entitled “Radio Galaxy Zoo: host galaxies and radio morphologies derived from visual inspection” outlines the project and provides the first look into some of the science that has come from Radio Galaxy Zoo. 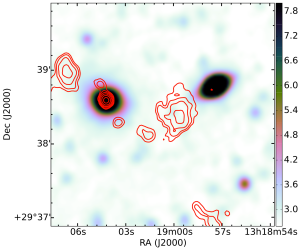 Fig. 1. An example of a galaxy where visual identification of the radio components is necessary. the automated algorithms would have classified the non-core emission as independent sources, whereas RGZ volunteers (in agreement with the science team) find all five radio emission components in the upper half of the image to be related to the same source.

As mentioned in our previous article about the paper, we find that the RGZ citizen scientists are as effective as the RGZ science team in identifying the radio sources and the host galaxies.  The project now has over 7500 citizen scientists and their contributions are individually acknowledged at http://rgzauthors.galaxyzoo.org

Using the classifications of the WISE infrared host galaxies, we find that the majority of the host galaxies are located in the WISE colour space consisting of elliptical galaxies, quasi-stellar objects (QSOs), and luminous infrared radio galaxies (LIRGs) – see Fig. 2.  Upon closer examination of the RGZ objects that are identified as elliptical galaxies in the WISE W1-W2< 0.5 colour space we note that our current sample shows a possible large population of star-forming galaxies and/or ellipticals with enhanced dust – see Fig. 3. 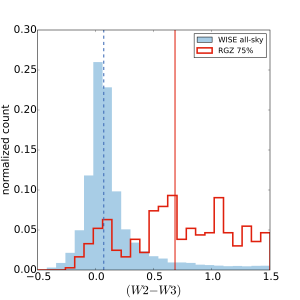 We still have a lot of radio sources in our project that need classification and we hope to continue the great work from all our citizen scientists and science team.  Don’t forget to head over to Radio Talk for interesting discussions on objects or some of the science in general.
Thank you once again for your hard work and support throughout the first years of Radio Galaxy Zoo!

How do black holes form jets? 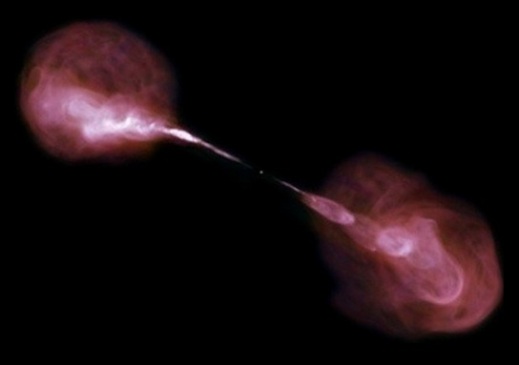 This post was written by Radio Galaxy Zoo team member Stas Shabala, an astronomer at the University of Tasmania.

The supermassive black holes at the hearts of galaxies are supposed to be simple. For someone looking at a black hole from afar, physicists tell us all black holes can be described by just three parameters: their mass, electric charge, and spin. For really big black holes, such as the ones astronomers deal with, things are even simpler: there is no charge (that’s because they are so big that there would always be enough neighbouring positive and negative charges to more or less cancel out). So if you know how heavy a black hole is, and how fast it spins, in theory at least you have enough information to predict a black hole’s behaviour.

Of course the black holes in Radio Galaxy Zoo often have at least one other, quite spectacular, feature – bright jets of radio plasma shooting through their host galaxy and into intergalactic space. Where do these jets come from?, I hear you ask. This is a very good question, and one to which astronomers are yet to find a wholly convincing answer. We have some pretty good hunches though.

The fact that black holes can spin might be quite important. Matter accreted by a black hole will rotate faster and faster as it falls in. Stuff closer to the equator will also rotate faster than stuff at the poles, and that causes the accreting material to flatten out into a pancake, which astronomers call the accretion disk.

The accreting matter near the black hole event horizon (a fancy term for the point of no return – any closer to the black hole, and not even light is fast enough to escape the gravitational pull) is subject to friction, which heats it up so much that individual atoms dissociate into plasma. These plasma (i.e. positively and negatively charged) particles are moving, so they are in fact driving an electrical current. When this current interacts with the rotating magnetic field of the black hole and the accretion disk, the charged particles are flung out at close to the speed of light along the axis of black hole rotation. We can see these fast-moving particles as jets in the radio part of the electromagnetic spectrum. A useful analogy is a car alternator, where electrical currents and magnetic fields are also combined to generate energy. 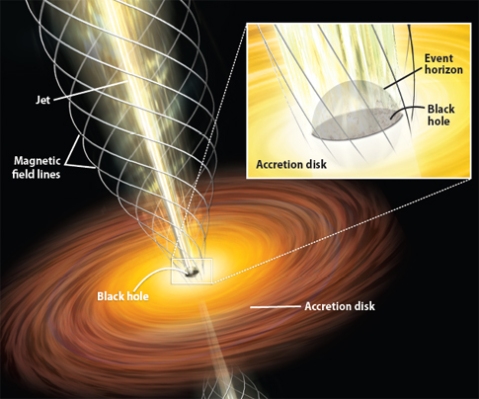 This artist’s conception is on a *really* different scale than the image at the top of this post. Compared to those (real) jets, this is zoomed in 100,000 times or so. Jets are big.

There are many things we don’t know. For example, we don’t know for sure where most of the jet energy comes from. It could be from the accreted matter, or the spin of the black hole, or a combination of both. We are also not sure exactly what sort of charged particles these jets are made up of. Understanding black hole jets is one of the great unsolved mysteries in astronomy. By studying a huge number of these jets at different points in their lifetimes, Radio Galaxy Zoo — with your help — will help us solve this puzzle.

It’s usually me who is reminding people to go blog about paper submissions and acceptances, so it’s a bit embarassing that I forgot to remind myself last week to announce the submission of the latest Galaxy Zoo paper.

I’ve been working on it for a while, probably over a year. The paper took so long to finish because not only did we have to analyse a huge amount of data, it also took quite a while to figure out what it all meant. I kept producing new plots that showed trends that didn’t really make any sense to us. We therefore needed to take our time digesting what we saw and condensing it into a `readable’ paper. It still over 20 pages long and there are still many results for which we could only offer some speculation. It’s not an easy paper to summarise, so I will (for now) simply summarise it as: “the black hole growth in spiral and elliptical galaxies is due to completely different evolutionary scenarios.”

Or, as I will put it in my talk on Friday at the IAU Symposium on the black hole-galaxy connection:

The answer may depend on

(thanks to stellar on the forum!)

Unlike our previous papers, this is the first paper that we have decided to submit to the Astrophysical Journal. Now fingers crossed that the refereeing process goes well.