This week’s OOTW features an OOTD posted by Lightbulb500 on the 22nd of February 2011. 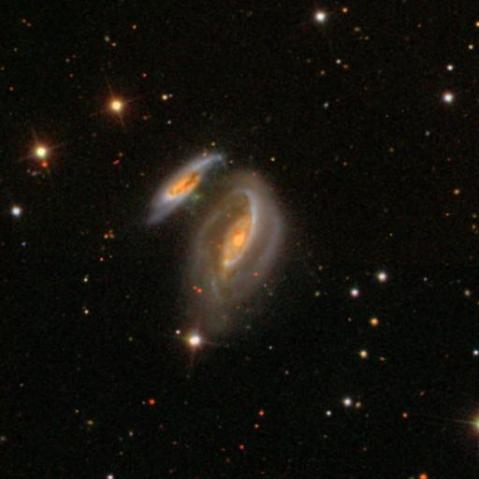 Lurking in the constellation Pegasus is this beautiful pair of active galaxies. Their catalogue names are UGC 12914 and UGC 12915, and their more imaginative name is the Taffy Galaxies.

In the words of Lightbulb:

The galaxies are located around 60 megaparsecs from Earth (or 196 million light years).

Both were once normal spiral galaxies, but are now in the midst of a high speed collision that has already stripped them of most of their hydrogen gas.

The pair will likely merge together at some point in the future.

What earns this pair their ‘Taffy’ designation is quite unusual. There is a bridge of hydrogen gas linking the two galaxies that is emitting large quantities of radio waves and is also producing at least a few stars. It is the presence of this intergalatic gas bridge that makes these Taffy galaxies.

While searching around for info I came across an interesting paper on this galaxy pair by J Braine et al (PDF here); it’s well worth a read. According to the paper, the galaxies collided more or less head on 20 million years ago, creating that widening bridge composed of anything between 2-9 x 10^9 solar masses of interstellar gas! The green tint in between the galaxies would be from H-alpha emissions, showing where the bridge is churning out newborn stars, or, where the collision sent out shockwaves, ionizing parts of the bridge.