Just a few days ago, long-time forum member Bruno posted a curious galaxy as his choice for “Object of the Day” for September 9th. Ahd what a strange merger it is! 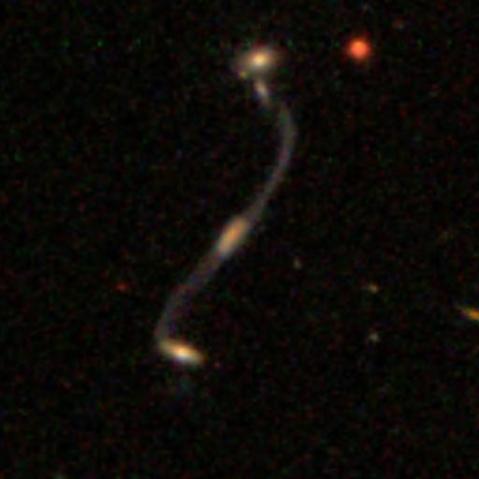 These are some really beautiful tidal tails. They are extremely long and thin and appear curiously poor in terms of star formation (very little blue light from young stars), which is odd since mergers do tend to trigger star formation. There is no spectrum so we do not know the redshift of the object. It is also not clear if the objects at either end are associated or just a projection.

There are photometric redshifts, then the whole system is over 110 kiloparsec across (that’s almost 360,000 light years!) which is big enough to catch even the attention of astronomers.

The “violin clef” merger also has a curious NVSS radio counterpart. What that is all about we don’t know yet – it could be a signal from star formation, or it could be a feeding black hole. The Galaxy Zoo team spent over half an hour discussing this object during a telecon meeting yesterday and we’re all excited.

We still know very little about the system, so if you want to help us figure out what’s going on here, why not head over to the Merger Zoo and simulate the cosmic collision that gave rise to this beautiful and enigmatic object:

7 responses to “Citizen Science in Action: the "Violin Clef" merger”