We got (some) observing time!

We applied for radio observations with the e-MERLIN network of radio telescopes in the UK. The e-MERLIN network can link up radio dishes across the UK to form a really, really large radio telescope using the interferometry technique. Linking all these radio dishes means you get the resolution equivalent to a country-sized telescope. You don’t alas get the sensitivity, as the collecting area is still just that of the sum of the dishes you are using. 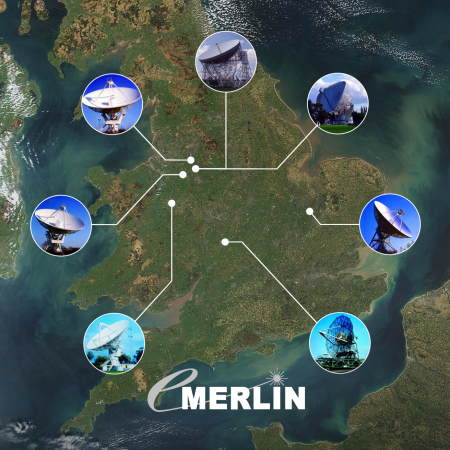 Our proposal was to observe the Voorwerpjes. We wanted to take a really high resolution look at what the black holes are doing right now by looking for nuclear radio jets. The Voorwerpjes, like their larger cousin, Hanny’s Voorwerp, tell us that black holes can go from a feeding frenzy to a starvation diet in a short time scale (for a galaxy, that is). We really want to see what happens to the central engine of the black hole as that happens. There’s a suspicion that as the black hole stops gobbling matter as fast as it can, it starts “switching state” and launches a radio jet that starts putting a lot of kinetic energy (think hitting the galaxy with a hammer).

So, we want to look for such radio jets in the Voorwerpjes. We asked for a LOT of time, and the e-MERLIN time allocation committee approved our request…

… partially. Rather than giving us the entire time, they gave us time for just one source to prove that we can do the observations, and that they are as interesting as we claimed. So, we’re trying to decide which target to pick (argh! so hard).

One response to “We got (some) observing time!”