This week much of the team has been in Sydney, Australia, for the Evolutionary Paths In Galaxy Morphology conference. It’s a meeting centered largely around Galaxy Zoo, but it’s more generally about galaxy evolution, and how Galaxy Zoo fits into our overall (ever unfolding) picture of galaxy evolution.

There’s a lot to that legacy already, and it’s still being written.

The first talk of the conference was a public talk by Chris, fitting for a project that would not have been possible without public participation. Chris also gave a science talk later in the conference, summarizing many of the different results from Galaxy Zoo (and with a focus on presenting the results of team members who couldn’t be at the meeting). For me, Karen’s talk describing secular galaxy evolution and detailing the various recent results that have led us to believe “slow” evolution is very important was a highlight of Tuesday, and the audience questions seemed to express a wish that she could have gone on for longer to tie even more of it together. When the scientists at a conference want you to keep going after your 30 minutes are up, you know you’ve given a good talk.

In fact, all of the talks from team members were very well received, and over the course of the week so far we’ve seen how our results compare to and complement those of others, some using Galaxy Zoo data, some not. We’ve had a number of interesting talks describing the sometimes surprising ways the motions of stars and gas in galaxies compare with the visual morphologies. Where (and how bright) the stars and dust are in a galaxy doesn’t always give clues to the shape of the stars’ orbits, nor the extent and configuration of the gas that often makes up a large fraction of a galaxy’s mass. 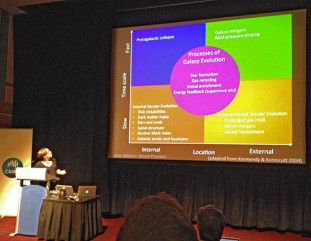 This goes the other way, too: knowing the velocities of stars and gas in a galaxy doesn’t necessarily tell you what kinds of stars they are, how they got there, or what they’re doing right now. I suspect a combination of this kinematic information with the image information (at visual and other wavelengths) will in the future be a more often used and more powerful diagnostic tool for galaxies than either alone.

Overall, the meeting was definitely a success, and throughout the meeting we tried to keep a record of things so that others could keep up with the conference even if they weren’t able to attend. There was a lot of active tweeting about the conference, for example, and Karen and I took turns recording the tweets so that we’d have a record of each day of the Twitter discussion. Here those are, courtesy of Storify:

Also, remember at our last hangout when we said we’d have a hangout from Sydney? That proved a bit difficult, not just because of the packed meeting schedule but also because of bandwidth issues: overburdened conference and hotel wifi connections just aren’t really up to the task of streaming a hangout. We eventually found a place, but then it turned out there was construction going on next door, so instead of the sunny patio we had intended to run the hangout from we ended up in an upstairs bedroom to get as far away from the noise as possible. Ah, well. You can see our detailed discussion of how the meeting went below, including random contributions from the jackhammer next door (but only for the first few minutes):

And now we’ll all return (eventually) to our respective institutions to reflect on the meeting, start work on whatever new ideas the conference discussions, talks and posters started brewing, and continue the work we had set aside for the past week. None of this is really as easy as it sounds; the best meetings are often the most exhausting, so it takes some time to recover. I asked our fearless leader Chris if he had a pithy statement to sum up his feeling of exhilarated post-meeting fatigue, and he took my keyboard and offered the following:

I’m sure that, if any tears were shed, they were tears of joy. This is a great project and it’s only getting better.