The Curious Lives Of Radio Galaxies – Part One

Today’s blog post is written by Radio Galaxy Zoo science team member Anna Kapinska, who works on radio jets and studies how they affect the galaxies which host them at various stages of the Universe’s evolution. This is the first of a two-part series.

As most of you know by now (after classifying hundreds of radio and infrared images in our amazing Radio Galaxy Zoo!) radio galaxies are not the type of object that most of us are used to. There’s no stars and dust; no light from that. It’s all about the jets – outflows of particles ejected from the vicinity of the galaxy’s monstrous supermassive black hole and moving nearly at the speed of light. Some of these particles, electrons, emit light while spiralling in the black hole magnetic field. By no means are the radio galaxies stationary or boring!

Figure 1: The famous Hercules A radio galaxy. The radio emission is imaged in pink and is superimposed on optical image (black/white) of the field. You can clearly see the jets extending from the central host galaxy to feed the lobes. Credits: VLA.

Radio galaxies can live for as long as a few hundred thousand or even a few million years. They grow and mature over that time, and so they change. They even don’t disappear straight after they die; that takes time too. So, how does the life of a radio galaxy look like?

Let’s start off with a simple plot astronomers like to use for an overview of a radio galaxy evolution during its lifetime. The plot describes how the radio luminosity changes with the radio galaxy size (Figure 2). The larger the radio galaxy, the older it is (usually), so we can trace the changes in radio galaxy luminosity and structure (size) as it gets older.

The early years
After a radio galaxy is born it will be growing up very quickly – in a blink of an eye its jets will be penetrating dense environments out to the borders of the host galaxy (the one you can see in optical and infrared wavelengths). Astronomers call these sources GPS (Gigahertz peaked sources) and CSS (compact steep spectrum) radio sources. The GPS/CSS sources are very small; they reach only kilo-parsec distances from the central black hole (3.5 thousand light years), which is merely few arc seconds, or even less, in radio images. This is the reason why we usually detect them as compact radio sources; however, one can sometimes see their double radio structure (that is the jets) in very high resolution radio images (Figure 3), hence really they are just mini-doubles!

This stage of radio galaxy life is the only one at which the radio galaxy luminosity rises steeply as the source grows in size. The stage lasts only for tens to hundreds of thousands of years, which is barely 0.1% of the radio galaxy’s lifetime. This means there is a very short window of time when we can spot CSS and GPS sources, but there are many of these sources around and they are also very bright (their radio luminosities are typically the maximum a radio galaxy can reach) so we often detect them.

The adulthood
After the childhood radio galaxies enter the adulthood. Astronomers have dozen of names to describe the adult radio galaxies and this depends on their structure observed in radio waves, but really, what these radio galaxies have in common is their age and size. They are usually tens to hundreds of millions of years old, and between tens and hundreds of kilo-parsecs in size (30 thousands – 3 million light-years). The luminosity of these radio galaxies slowly drops as they penetrate through the intergalactic space. When you inspect the Radio Galaxy Zoo images, these radio sources are the #hourglass, #doublelobe and #plumes. 3C 237 and Centaurus A are fantastic examples of what we usually see! (Figure 4).

You will quickly notice that there are two main types of these radio galaxies; one type that has very strong radio emission at the end of the lobes (#hourglass, #doublelobes) which is the signature of jets pushing through the ambient medium around radio galaxy. These radio galaxies are called FR IIs by radio astronomers, and the bright spots at the ends of the lobes are called hotspots. The second type has their maximum radio luminosity close to the supermassive black hole or half way through the lobes; these are #plumes within the Radio Zoo and are tagged FRIs by radio astronomers. Plumes are less powerful than the hourglass, but they are even more of a challenge to astronomers! 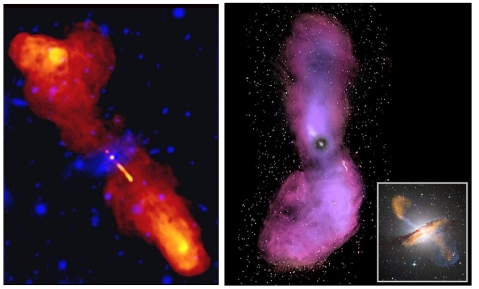 Figure 4: The FRII type 3C 237 radio galaxy (left) is 290 kilo-parsecs (0.95 million light-years) across. You can clearly see the bright yellow spots at the end of the radio lobes (orange). The blue objects are the optical galaxies and stars, and the white central object is the host galaxy of 3C 237. On the right is huge FR I type Centaurus A radio galaxy which is 700 kilo-parsecs (2.3 million light-years) in size; its radio structure in this image is marked in violet and in the centre we can see optical image of its host galaxy. In the left bottom insert of the image you can see the zoom-in of Centaurus A host galaxy together with small scale jets feeding the larger radio structure. Credits: NRAO, CSIRO/ATNF, ATCA, ASTRON, Parkes, MPIfR, ESO/WFI/AAO (UKST), MPIfR/ESO/APEX, NASA/CXC/CfA

35 responses to “The Curious Lives Of Radio Galaxies – Part One”