In this work we used an early look at the information you have provided us on the presence of bars in a sample of GZ2 galaxies too look at trends of the bar fraction (basically how likely a certain type of disk galaxy is to have a bar) as a function of other properties. 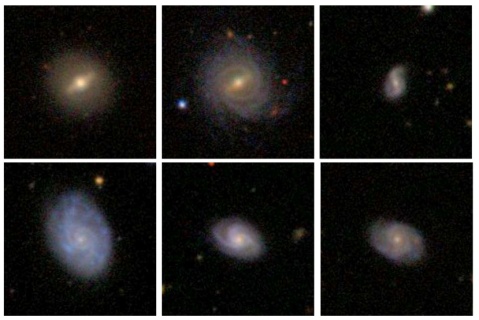 In doing this research I’ve learned that bars are really interesting features in disk galaxies. Unlike spiral arms, which are density waves (meaning stars pass in and out of them over the life of the galaxy), the matter in bars (stars and gas etc) actually rotates with the bar. This means that the bar breaks the symmetry of the disk of the galaxy and causes transfer of material both in an outwards along its length. What it boils down to is that bars should have a significant impact on the internal evolution of a galaxy. They have been suggested as a way to build some types of bulges, as a way to fuel star formation in the central regions, and perhaps even fuel AGNs. At the outer ends, the bar can induce ring like structures (see the top middle example) – and might even be responsible for driving spiral structure.

So what did we find? Well we observed a strong correlation between the bar fraction and the colour of the disk galaxy. Redder disk galaxies are much more likely to have bars identified by GZ2 users than bluer disk galaxies.

Bar fraction as a function of galaxy colour. The dashed line shows the overall bar fraction for the whole sample.

We also tried to split the sample by the size of the bulge. We find that disks with large bulges (shown by the red line below) have high bar fractions, and that disks with small bulges (shown by the blue line) have low bar fractions. This split by bulge size also splits the disks into things which are mostly red (large bulge) and blue (small bulge) – as illustrated by the histograms of the colour distribution of the two types of disk galaxies. What’s new here is that we show this also correlates strongly with the presence of a bar. 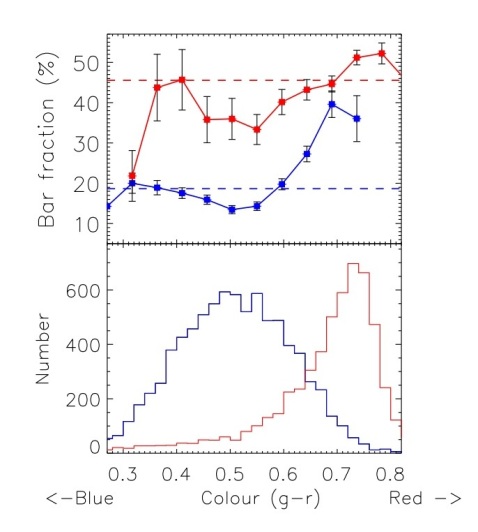 This gives an overall picture in which bars may be very important to the evolution of disk galaxies – perhaps more so than has been thought before. It’s very interesting, and I look forward to spending more time with barred galaxies and with the rich data set that you have given us with Galaxy Zoo 2.