Here are some pictures from the recent Kitt Peak observing run, illustrating the experience beyond just our data collection (as interesting as that was, and continues to be). Collecting these was easier than usual since I had colleagues at the telescope, so I could run off and shoot pictures from the dome’s catwalk without worrying about the telescope. Kitt Peak is home to over 20 telescopes – not just those operated by the National Optical Astronomy Observatories, but additional ones operated under tenant agreements by the University of Arizona and consortia of other institutions (plus the Kitt Peak visitor programs running 3 30-40 cm telescopes of their own). You can see many of them strung along the summit in this view from the southwest. From left to right, they are the Mayall 4m, University of Arizona’s Bok 2.3m 0.9, and Spacewatch 1.8m, SARA 0.9m, 0.9m Burrell Schmidt, Calypso Observatory 1.3m, WIYN 3.5m, public 0.35m, WIYN 0.9, Kitt Peak 2.1m, and the tower of its coude feed telescope. (These will not be on the quiz).

View of observatories at Kitt Peak

Our visit started with a night onsite at the 0.9m SARA telescope, a rarity since it is usually operated remotely from one of 10 partner institutions. We were training some summer research students there, so they could have a better understanding of what happens when they clock those virtual buttons. Here is the telescope itself, and a twilight view under the stars.

Checking the mirror of the Kitt Peak 2.1m telescope

At the 2.1m telescope, Drew checks to make sure the primary mirror is still there. Fortunately it was, so we could go about our observations without having to explain something quite this bizarre to the management.

The CCD we were using to detect the spectra works most efficiently when cool – really cool. Its kept in contact with a bath of liquid nitrogen, that had to be refilled every 12 hours. You know it’s full not when vapor pours out of three ports behind it, but when droplets of liquid nitrogen can be heard hitting the floor. That plastic face shield seemed like a better and better idea.

The action naturally picks up around sunset – make sure your internal calibration measurements are finished, open the dome to let the inside and outside air come to equilibrium for best image quality. 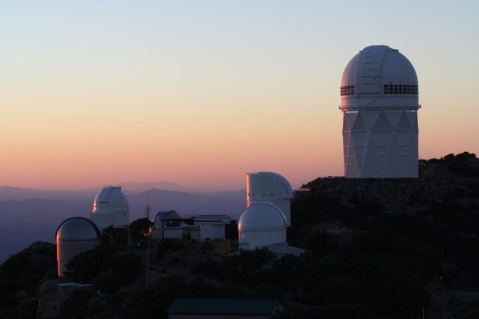 Of course, with solar telescopes on the mountain, you get really impressive views of the sunset from there. One of these shows an airplane – could be an airliner over California, or a large military plane over a training range closer to the west; the air was too turbulent to tell.

Sunset with plane through solar telescope

As each night progresses, the Moon waxed from a fingernail-shaving crescent to an annoyingly bright gibbous phase. For the first few nights, moonset was just an interesting spectacle. 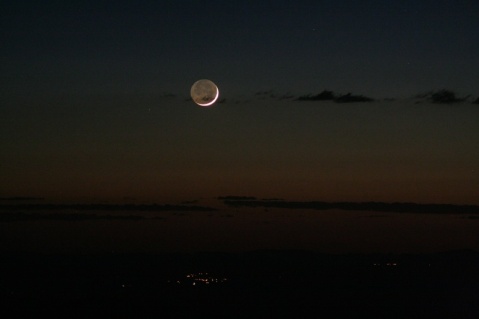 Later it became a marker for when we could look for fainter galaxies and get better data without the interference of moonlight in the sky.

Similarly, the phase of the moon affects not only our data, but the whole view of the night sky. In so-called dark time, we could watch the Milky Way rise only once did we sit on the catwalk munching Milky Way bars while doing this). The lights the distance are mostly from the Mexican city of Nogales, Sonora, just over the border. It is much larger than the twin town of Nogales, Arizona (which I think is an important place because that’s where my wife was teaching when we met. But I digress.)

As the Moon waxed, the view of the mountaintop changed – the domes cold be seen along with great numbers of stars if there was just the right amount of moonlight.

I always find it a very evocative view to see a telescope silhouetted against the stars, and keep trying to get a picture that adequately captures the feeling. This was my latest attempt. 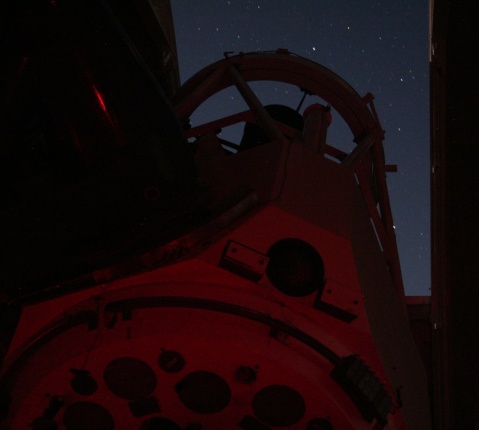 The 2.1m telescope shares a building with the Coude Feed Telescope, an arrangement which allows the smaller 0.9m feed mirror to direct light into the giant room-filing code spectrograph when it’s not used by the main telescope. Here, you see that telescope’s fixed primary mirror at the top of a separate tower and the moving flat mirror which feeds it starlight. In the distance is the striking peak known as Baboquivari, which plays a central role in the lore of the Tohono O’Odham people (on whose land and by whose permission Kitt Peak National Observatory is located).

The coude spectrograph fills a large tilted room below the telescope. Here is one of its diffraction gratings, about 60 cm across.

Just before dawn each night, we were in the right place to see the Hubble Space Telescope pass high in the south. Here is its trail emerging from behind the 2.1m dome – from one 2-meter telescope to another!

Dawn’s glow first mingled with the lights of the city of Tucson about 50 km away (adorned here by the Pleiades as well just before they vanished for the day).

Dawn over Tucson from Kitt Peak

We also took the time to visit a bunch of the astronomical neighbors, but that can be a post for another day…

7 responses to “A Kitt Peak gallery”