I’m going to take a little time to tell you about John Huchra and even if his name isn’t familiar yet, I hope you’ll understand why when I’m done. I don’t think anyone would disagree with me when I say that John Huchra (1948-2010) was a great astronomer, and a great man.  His impact is felt in many areas of extragalactic astronomy, but in particular he leaves an immense legacy in our progress in mapping the universe. 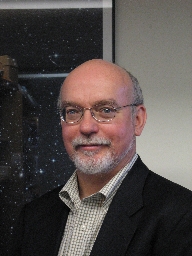 In the 1980s, John (working with his collaborator Margaret Geller and others) published a new map of part of the universe (see below). John was an enthusiastic observer, and much of the data in the below figure comes from his long nights at the telescope. What the below shows is the position of galaxies in a slice from 8h-17h in right ascension and between 26.5-32.5 degrees in declination (a long and skinny strip which starts near “the twin stars” in Gemini and passes through Coma and Bootes ending in Hercules). In this strip galaxies are then spread out according to their redshift which because of Hubble’s Law acts as a proxy for distance.

The below image became famous because of the so-called CfA Stick Man (CfA after the Center for Astrophysics where the work was done). This “stick man” indicates the position of the Coma cluster (in the Coma constellation) where there is a large collection of galaxies, and where redshifts no longer equate so well to distance because of the large motions of the galaxies around the centre of mass of the cluster. This means in a redshift plot, all the galaxies get spread out in along the line of sight, and in this particular map end up looking like a stick man! 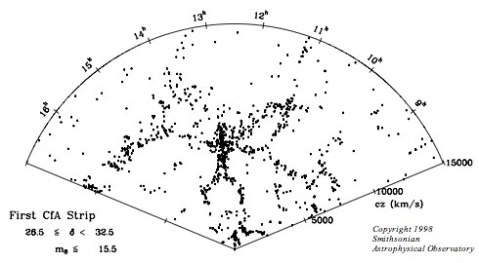 Distribution of galaxies in the CfA Redshift Survey

For astronomers this diagram showed conclusively that galaxies were not distributed randomly in the universe, and led to a complete revision of the way astronomers thought about the formation of galaxies. John and his collaborators got it absolutely right in their abstract which ended “These data might be the basis for a new picture of the galaxy and cluster distributions.”

John never stopped mapping the universe, and one of his passions was for measuring galaxy redshifts. For a most of his career this was a painstaking and time consuming process of taking spectra after spectra of single galaxies. But this process was clearly something John loved (as you can see for yourself if you ever find a copy of “So Many Galaxies, So Little Time” which is unfortunately not yet on YouTube!).

In fact John’s legacy in this area is not quite finished. He has a continuing program (The 2MASS Redshift Survey) on the CfA’s Fred Lawrence Whipple Observatory in Arizona to measure redshifts for all galaxies in 2MASS (an all-sky survey in the near infra-red) to a fixed brightness limit (just over 40,000 galaxies in total) which just needs a handful more observations to be complete. John was also involved in some of the more modern galaxy redshift surveys, which use multi-object spectrograph (instruments which can take spectra of many galaxies at once) – especially the 6dFGRS (6dF galaxy redshift survey) in the southern sky (which is the southern part of the 2MASS redshift survey).

Along with redshifts, John was very interested in measuring direct distances to galaxies and pinning down the value of the Hubble Constant (the scaling factor between redshift and distance in Hubble’s Law). He was involved in the famous Hubble Key Project which measured H0 to 10% accuracy. The below picture shows many of the people involved in that project at the meeting where it was initiated.

John (kneeling) in 1985 at a meeting on the Cosmic Distance Scale at the Aspen Center for Physics. 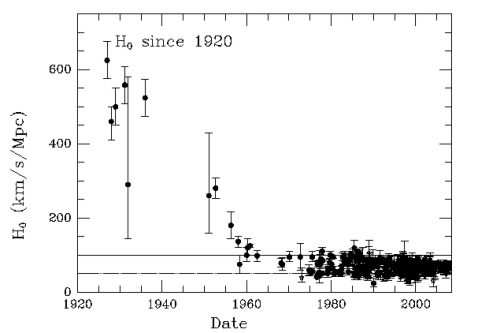 Published values of the Hubble Constant

He also has a more complete History of the Hubble Constant, which explains all of this and is well worth a read.

I had the honour and privilige to work with John Huchra during my postdoctoral appointment at Harvard (2005-2008). I was hired to work on the 2MASS Redshift Survey, and ended up initiating a program to measure distances to some of the brighter spirals in it (using a relationship between how fast spirals rotate and how bright they are). I was working at Harvard when I first learned about the Galaxy Zoo project (from the BBC press at its first release). John and I did discuss Galaxy Zoo and it was definitely something he was interested in. In fact, many of the “professional” morphological classifications you can find (for example published in the NASA Extragalactic Database) come from John, and while I was at Harvard he was working on completing his personal morphological classification of the brightest half of the 2MASS Redshift Survey (roughly 20,000 galaxies). He just liked looking at galaxies I think.

John’s contributions to astronomy are immense. A search for his publications in the online database ADS will tell you that over his 40 year career he was involved in more than 700 papers, with a combined number of over 30,000 citations. Many of these papers are with students and postdocs he mentored, and he leaves a massive contribution in this area too – mentoring not only those who formerly worked with him, but so many others informally at conferences and meetings. John always had time for a chat.

John Huchra died on 8th October 2010. His death seemed sudden and unexpected to many in the astronomical community, perhaps because John was extremely visible right up until his death. He had only just stopped being the President of the American Astronomical Society, and had participated heavily in the US Decadal Survey (ASTRO 2010).

John had however had serious heart problems following a heart attack in 2006, and it seems had personally known his days were numbered. I like to believe he made a conscious choice to remain working in the field he loved, while enjoying his remaining time with his wife and teenage son. It will never have been enough time, and his loss (both personally, and to the field of astronomy) is deeply felt.

John is remembered in obituaries in The New York Times, and The Telegraph, as well as blogs from Cosmic Variance, and The Bad Astronomer, and Astronomy Now

He has a short autobiography on his website where you can read about him in his own words circa 1999. The rest of his website is also a treasure trove of useful information and links.

John, by definition, we’ll miss you.