This OOTW features Budgieye’s OOTD posted on the 18th of November 2010. 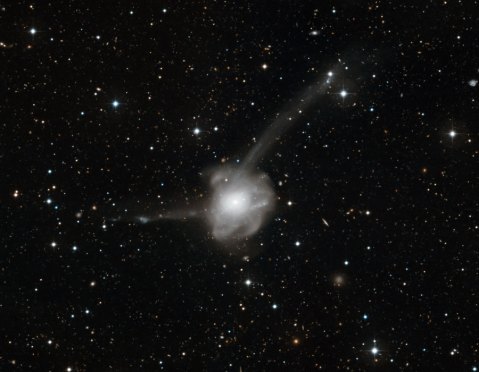 This is NGC 7252, or the Atoms-For-Peace galaxy. This beautiful merger lurks in the constellation Aquarius 220 million light years away. It’s a beautiful example of a galaxy interacting with another, with both galaxies twisting round each other as they are caught up in each others gravitational pull. As this happens over a course of millions and billions of years tidal tails are thrown out, creating streamers of stars stretching for thousands of light years. As well as beautiful streamers the collision has created hundreds of new stars from the disruption, and many new star clusters only 50-500 million years old are now spread out across the galaxy.

And what of the name?

The galaxy – which looks rather like a diagram of an atom – was named after a lecture called Atoms for Peace, which was given by the US president Dwight D. Eisenhower in 1953. In his lecture, he called for nuclear power to be used for peaceful rather than destructive purposes.

There’s more info on the galaxy at ESO!

One response to “NGC7252: The Atoms-For-Peace Galaxy”