Today’s post is by Alfredo Carpineti, a Ph.D student at Imperial College:
I’m happy to inform you that a paper on the properties of spheroidal post-mergers (SPMs) has been accepted for publication by the Monthly Notices of the Royal Astronomical Society. The arXiv link to the paper is http://arxiv.org/abs/1111.5008.
We are interested in post-mergers because we want to study in the hierarchical model of galaxy evolution and understanding the evolution of galaxies along a merger sequence is necessary to achieve this. We define post-mergers as single-core galaxies with tidal feature or disruption that can only be explained as merger related. 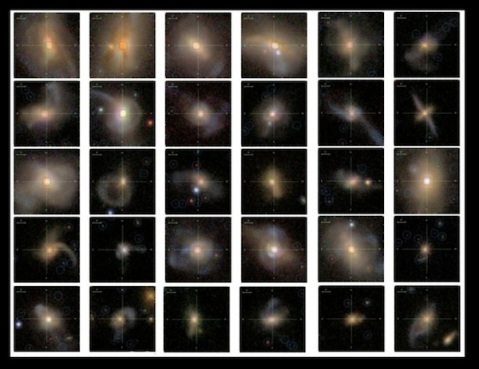 In our paper we found that the vast majority of the SPMs inhabit low-density environments and that they sit between mergers and ellipticals in colour space, which indicates that the peak of star formation activity takes place during the merger phase. However the AGN fraction peaks in the post-merger phase (compared to the mergers) suggesting that the AGN phase probably becomes dominant only in the very final stages the merging process.

In general the SPMs are very active, with 84% of the galaxies in our sample showing some emission-line activity compared to the 63% of the mergers and the 27% of the relaxed ellipticals.  The post-merger phase might be less showy than the merger phase, but it’s clear that the dust is yet to set in these galaxies.

Finally we compared the colours of the SPMs to models in which a young stellar population (with an age of 500 million years) is superimposed on an old population that forms 10 billion years in the past (since the bulk of the stars in elliptical galaxies are known to be old). We found that, under these assumptions, the vast majority of the SPMs are likely to have formed more than 5% of their stellar mass in the recent merger-driven burst. Since ellipticals themselves are rather gas-poor objects, our results indicate that ∼55% of the SPMs are products of major mergers in which at least one of the progenitors is a late-type galaxy.