It seems that finding our Milky Way’s twin has become a bit of an industry these days.

NASA/ESA have got in on the act today, releasing a press release about their favourite twin of the Milky Way, NGC 1073 and the below absolutely gorgeous Hubble Space Telescope image they’ve taken of it: Classic Portrait of a Barred Spiral. 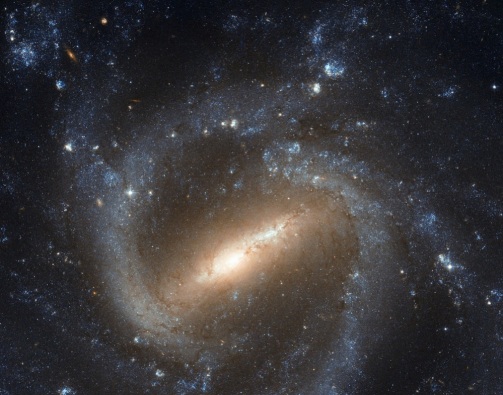 And it does look a lot like what we think the Milky Way looks like – except perhaps for having slightly less tightly wound arms.

An artists impression of our Galaxy. Credit: NASA/JPL-Caltech/Robert Hurt (SSC-Caltech)

You might remember, back in September I posted a guest blog by Portsmouth A-level student, Tim Buckman, who spent his summer with us at Portsmouth finding the Galaxy Zoo galaxy we thought was most like the Milky Way: “A Summer Spent Finding our Galactic Twin “. His project in turn was inspired in part by an ESO press release about spiral galaxy NGC 6744 which was claimed to be a twin for the Milky Way (A Postcard from Extragalactic Space). 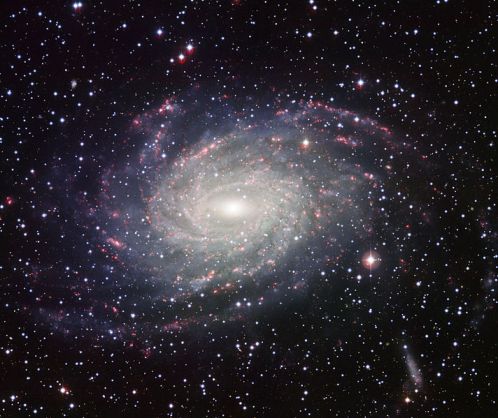 NGC 6744 is quite a lot more massive than our Milky Way however, so I thought we could do better with SDSS and Galaxy Zoo. Tim applied some mass cuts, then used your classifications to find a face-on 4 armed spiral which he thought matched the maps of the Milky Way (which has a bar, but perhaps a rather weak one which might not be obvious in the types of images we used for Galaxy Zoo).

Tim’s Milky Way clone based on your Galaxy Zoo classifications

I was interested to notice last month that one of the most popular press releases from the AAS this year was about finding a sample of galaxies like our Milky Way and using them to estimate what the colour of the Milky Way would be (BBC Article: Milky Way’s True Colours; AAS abstract it’s based on: What is the Color of the Milky Way?), especially interesting to me as it turns out the Milky Way might be on it’s way to being a red spiral (as has been suggested before, e.g. by Mutch, Croton, Poole (2011), or see New Scientist article about this paper: Milky Way Faces Midlife Crisis), which you might remember I’ve done a bit of work on! 😉

For Galaxy Zoo people, it should be of interest that the press release also says:

Some astronomers have suggested that the formation of a central bar-like structure might signal a spiral galaxy’s passage from intense star-formation into adulthood, as the bars turn up more often in galaxies full of older, red stars than younger, blue stars.

Well those astronomers are us – Galaxy Zoo results on bars, based on your classifications have shown that bars are more common in redder discs. Thanks again for the classifications which allowed us to do that work.

3 responses to “Another Galactic Twin”