Night 2 at Kitt Peak – watching out or blown away?

The forecast for tonight’s continued imaging of Galaxy Zoo overlapping galaxies was marginal, with a storm expected. That has not yet materalizd, ut the wind have been so high that, after the anemometer flirted with the 72-km/hour safety limit for two hours after sunset, I finally had to shut down a little whole ago. There are data on two pairs so far tonight, and I’ll naturally keep one eye on the wind speed. If it drops back, I’ll open again.

Meanwhile, there has been time to look over last night’s data and do some basic processing. Here, for example, is a quick and dirty composite image of Markarian 238 and its larger spiral companion from B and R images. The display is set to show the inner structures most clearly. 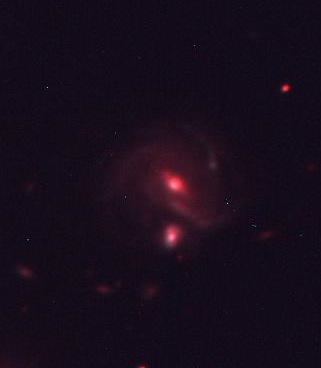 (0710 UT, three hours later) The wind continues to howl under a frustratingly clear sky; some clouds are just appearing which may be parts of the predicted storm system. Gusts up to 83 mph (133 km/hour) have been recorded in the last hour. With the outside temperature less than 2 C, I try not to think of the wind chill.

3 responses to “Night 2 at Kitt Peak – watching out or blown away?”