What we still don’t know

I used to think that science was about discovery, about adding certainty to what we know about the Universe. Discoveries happen, of course, but I’ve learned that the really exciting stuff happens not when we expand our knowledge, but our ignorance; progress is measured in the number of unanswered questions we have. After all, any good result raises more of those than it answers.

I have this in mind because today is the 5th anniversary of the launch of Galaxy Zoo, and it’s tempting to write about how we – with your help – have magnificently fulfilled the vision we had back in 2007. After all, in that first story on the BBC news website; a youthful version of me chirps that “We hope that participants in Galaxy Zoo will not only contribute to science, but have a lot of fun along the way”. Science? Check. Fun? Check..

But did we really understand what we were getting into? Certainly not. We’ve rehearsed before the story that we didn’t understand the size of the response we would get, nor the undimmed enthusiasm for sharing in exploring the Universe that still motivates volunteers today. But on launch, we didn’t realize we needed this blog to explain what we were doing with the clicks, nor the forum; which (thanks to the efforts of Alice Sheppard and team) has played such an important role in defining Galaxy Zoo. We didn’t realize that detailed classifications, of bars and three-armed spirals, of bulgeless disks and merging galaxies, were possible, nor that thanks to the Hubble Space Telescope we’d end up exploring the distant Universe, peering at blue blobby galaxies in a mixture of interest, awe and frustration.

We didn’t realize that spontaneous discovery, serendipitous exploration of the cosmos would come to provide some of the most entertaining and scientifically valuable results from the project. From the Voorwerp, to the recent Hubble images of the Voorwerpjes; (another hit my inbox this morning – watch this space) through to the Peas which are now attracting rather a lot of attention). On a personal note, on that July morning in 2007 I didn’t know most of the people who would lead this scientific return – Kevin, of course, was still recovering from classifying 50,000 galaxies himself, and Kate Land and Anze Slosar provided sterling support, but Steven Bamford and Karen Masters in particular had yet to step forward into their leading roles. Much of this science will be celebrated at a one day meeting at the Royal Astronomical Society next year on ‘Galaxy Morphology in the era of large surveys’ – mark your diaries for May 10th! The most exciting work to be presented at that meeting probably doesn’t exist yet – I suspect we’ll still be puzzling over exactly what bars do to galaxies (or vice versa), and arguing about exactly how black holes grow, but all we have at the moment is an ever-growing pile of questions. Which is, of course, exactly as it should be. 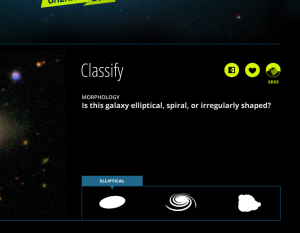 We also didn’t know what we didn’t know when it came to development. The original site worked brilliantly, thanks to the efforts of Phil Murray; and Dan Andreescu, but probably the biggest change over the last few years has been the arrival of Arfon Smith and his merry band of developers. That, of course, has spawned a whole new Zooniverse, which has sent us hunting for supernovae, planets, looking for bubbles and even listening to whales. In that manic expansion, Galaxy Zoo has occasionally been left behind, but I’m pleased to say that a new site is on the way. By the middle of August, a brand new site will be serving up images of new galaxies, both from the deep CANDELS survey and, returning to our roots, from the latest data release of the Sloan Digital Sky Survey. We do need to have a few more clicks on the existing site, though, so anyone who classifies in the next two weeks on Galaxy Zoo will be rewarded with early access to the new site (whether or not you’re still reading at this point).

So much for the next few weeks. What of the next few years? I could tell you that as Galaxy Zoo has established citizen science as a standard way of doing astronomy, you’ll see many more projects from us exploring pretty much every aspect of the Universe. I could tell you that I suspect that live interaction with data fresh from the telescope; is going to be increasingly important as the amount of data available to astronomers reaches at least 120 terabytes by the end of the decade. I could spend hundreds or thousands of words convincing you that advanced tools are key, that we’re going to need many more people to follow the lead of the denziens of the forum and get deeply involved in the science that lies beyond clicking. And I could tell you of our determination to finally crack a means of getting Galaxy Zoo firmly into the classroom, but the truth is anything could happen. And that’s just the way we like it.

P.S. To anyone who has taken part in the last 5 years – thanks a million. Now go and get classifying.

11 responses to “What we still don’t know”