This post is the first of a series introducing the new Galaxy Zoo. The second is here, but come back in the next few days for more information about our fabulous new site

As you’ve probably already noticed, the Galaxy Zoo interface got a shiny new facelift thanks to the wizards in the Zooniverse development team, but that’s not all. The site is stuffed with new galaxies! These brand new, never-seen-before images come from two places:

The new SDSS images (right), drawn from the latest data release, are better and hopefully easier to classify than the old (left).

You might remember that the original Galaxy Zoo 1 and 2 used images from the Sloan Digital Sky Survey (SDSS), a robotic telescope surveying the ‘local’ Universe from its vantage point in New Mexico. These images are now prepared in a slightly different way, in order to highlight subtle details. To better understand these galaxies, drawn from our own backyard, we’re making those improved images available through the new Zoo classification page. (These are actually new galaxies, from parts of the sky that SDSS hadn’t surveyed when we launched Zoo 2).

We’ve already gone though Hubble Space Telescope images with the Hubble Zoo, but there are some exciting new observations available from Hubble that we just couldn’t pass on. In 2009, astronauts on Space Shuttle mission STS-125 visited Hubble for a final time and installed an exciting new camera in the telescope. This camera, called Wide Field Camera 3 (WFC3) can take large (by Hubble standards!) images of the infrared sky. 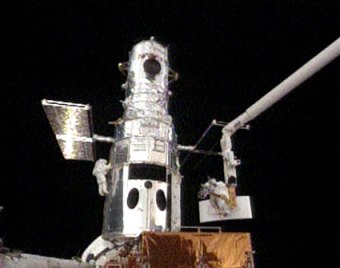 As we peer deeper into the Universe, we look into the past, and since the universe is expanding, the galaxies we see are moving away from us faster and faster. This means that the light that left them gets stretched by the time it reaches us. Thus, the light from stars gets “redshifted” and to see a galaxy in the early universe as it would appear in visible light locally, we need an infrared camera. 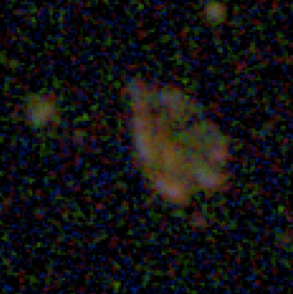 A weird “clumpy” galaxy spied by Hubble in the early universe. Galaxies like this don’t seem to be around anymore in the local universe, so we’d love to know better what they are and what they will turn into…

Taking infrared images is much harder than optical ones for many reasons, but the most important is that the night sky actually glows in the infrared. This fundamentally limits our ability to take deep infrared images, which is why Hubble’s new WFC3 with its infrared capability is so valuable: in space, there’s no night sky! Hubble is currently using the WFC3 to survey several patches of the sky as part of the CANDELS program (more on that soon!) to generate deep infrared images of galaxies in the early universe and we’re asking you to help us sort through them.

We are also introducing Galaxy Zoo Talk, a place where you can post, share, discuss and collect galaxies you find interesting and want to learn more about. You can of course still join us on the Forum, but Talk will make it easier for you to systematically discuss and analyse your galaxies.

There’s a whole new mountain of galaxies to go through, so happy classifying!

13 responses to “New Images in the New Galaxy Zoo”