A Galaxy in a Teacup (or vice versa)

Back in October 2007, in the early months of Galaxy Zoo, active Zoo participant and overlapping-galaxy finder extraordinaire Half65 posted this object in the Forum.

It was discussed within the science team once the nature of Hanny’s Voorwerp was becoming clear, since the color of that giant loop suggested similar emission-line properties at a larger redshift. Kevin gave it the name “Teacup” in honor of this loop. Then in March 2009, Georgia State University colleague Mike Crenshaw was here on my campus for a thesis defense. I showed him this object, and he mentioned that one of their graduate students was doing spectroscopy of active galaxies at the Lowell Observatory 1.8m telescope that week. Two nights later, Stephen Rafter from GSU obtained a long-slit spectrum crossing the loop and showed that it was, indeed, gas photoionized by an AGN. Later this object featured in the Voorwerpje hunt, as one of the 8 cases showing an energy deficit from the nucleus so it must have faded. Indeed,  this example was a major factor in showing that the Hunt project would be worthwhile.

Meanwhile, the GSU astronomers gathered more spectra from Lowell, crossing the Teacup in different places and getting a complete spectroscopic map. Taking advantage of this larger data set, GSU grad student Justin Gagne led a project combining their data with our own Lick and Kitt Peak spectra. The results are in a paper just accepted for publication in the Astrophysical Journal and posted on arxiv:

Spatially-Resolved Spectra of the “Teacup” AGN: Tracing the History of a Dying Quasar

The Sloan Digital Sky Survey (SDSS) Galaxy Zoo project has revealed a number of spectacular galaxies possessing Extended Emission-Line Regions (EELRs), the most famous being Hanny’s Voorwerp. We present another EELR object discovered in the SDSS endeavor: the Teacup Active Galactic Nucleus (AGN), nicknamed for its EELR, which has a handle like structure protruding 15 kpc into the northeast quadrant of the galaxy. We analyze physical conditions of this galaxy with long-slit ground based spectroscopy from Lowell, Lick, and
KPNO observatories. With the Lowell 1.8m Perkins telescope we took multiple observations at different offset positions, allowing us to recover spatially resolved spectra across the galaxy. Line diagnostics indicate the ionized gas is photoionized primarily by the AGN. Additionally we are able to derive the hydrogen density from the [S II] 6716/6731 ratio. We generated two-component photoionization models for each spatially resolved Lowell spectrum. These models allow us to calculate the AGN bolometric luminosity seen by the gas at different radii from the nuclear center of the Teacup. Our results show a drop in bolometric luminosity by more than two orders of magnitude from the EELR to the nucleus, suggesting that the AGN has decreased in luminosity by this amount in a continuous fashion over 46,000 years, supporting the case for a dying AGN in this galaxy independent of any IR based evidence. We demonstrate that spatially resolved photoionization modeling could be applied to EELRs to investigate long time scale variability.

This picture shows Mike and Justin, when I walked up the street to visit them at lunchtime during a DragonCon session last fall. For those who have been to Atlanta, their building at Georgia State is behind the giant Coke sign near Underground Atlanta. 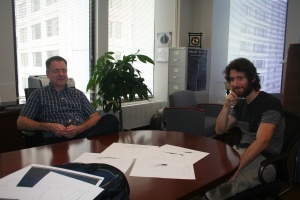 Justin modeled the spectra in detail using the standard CLOUDY software, which does complete modeling of the state of gas and its spectrum under astrophysical conditions, particularly often used in analyzing active galactic nuclei. His results show that not only has the nucleus faded , but the fading can be tracked across the gas inwards. Trying to get better fits (egged on by  collaborators), he also isolated a role for ionization by cosmic rays leaking from the radio blob seen in FIRST survey data. One coauthor started not  believing a word of it but found the data and models convincing (which is how we’re supposed to come to scientific conclusions, after all). There is a particularly nice comparison with our Hubble analysis, which also shows a drop in AGN luminosity over the last 50,000 years from a completely different kind of evidence (the brightest H-alpha emission at each radius).

Meanwhile, we are close to submission of complete papers on analysis of the Hubble data and additional new observations from other instruments, and just had the first spectroscopic data taken with the integral-field unit on GMOS spectrograph at the 8-meter Gemini-North telescope. Justin has politely declined my invitation to repeat his analysis on the 700 or so spectra we should get for various parts of the Teacup from GMOS.

One response to “A Galaxy in a Teacup (or vice versa)”