What’s all the fuss about bars in galaxies?

Since our discovery in 2010 that the red spirals identified by your classifications in the first phase of Galaxy Zoo were twice as likely to host galactic scale bars as normal blue spirals, a lot of our research time has focused on understanding which types of galaxies host bars, and why that might be. 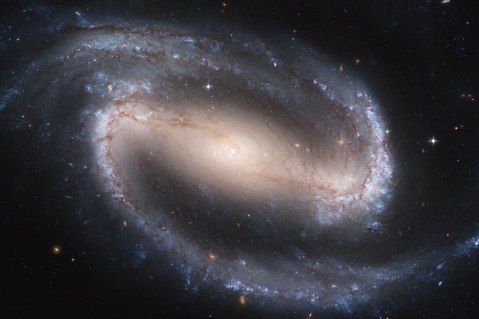 We’ve also used your classifications as part of Galaxy Zoo Hubble and Galaxy Zoo CANDELS to identify the epoch in the universe when disc galaxies were first stable enough to host a significant number of bars, finding them possibly even earlier in the Universe than was previously thought.

Last Friday I spoke at the monthly “Ordinary Meeting” of the Royal Astronomical Society, giving summary of the evidence we’re collecting on the impact bars have on galaxies thanks to your classifications (a video of my talk will be available at some point). This was the second time I’ve spoken at this meeting about results from Galaxy Zoo, and it’s a delightful mix of professional colleagues, and enthusiastic amateurs – including some Galaxy Zoo volunteers.

Prompted by that I thought it was timely to write on this blog about what these bars really are, what they do to galaxies, and why I think they’re so interesting. I wrote the below some time ago when I had a spare few minutes, and was just looking for the right time to post it.

The thing about galaxies, which is sometimes hard to remember, is that they are simply vast collections of stars, and that those stars are all constantly in motion, orbiting their common centre of mass. The structures that we see in galaxies are just a snapshot of the locations of those stars right now (on a cosmic timescale), and the patterns we see in the positions of the stars reveals patterns in their orbital motions. A stellar bar for example reveals a set of very elongated orbits of stars in the disc of a galaxy.

Another extraordinary thing about a disc galaxy is how thin it is. To put this is perspective I’ll give you a real world example. In the Haus der Astronomie in Heidelberg you can walk around inside a scale model of the Whirlpool galaxy. The whole building was laid out in a design which reflects the spiral arms of this galaxy. However it’s not an exact scale model – to properly represent the thickness of the disc of the Whirlpool galaxy the building (which in actual fact has 3 stories and hosts a fairly large planetarium in its centre) would have to be only 90cm tall…..

The Haus der Astronomie, a building laid out like a spiral galaxy.

Such an incredibly thin disc of stars floating independently in space would be quite unstable dynamically (meaning its own gravity should cause it to buckle and collapse on itself). This instability would immediately manifest in elongated orbits of stars, which would make a stellar bar (as part of this process of collapse). Simple computer models of disks of stars immediately form bars. Of course we now know that galaxy discs are submerged in massive halos of dark matter. So my first favourite little fact about bars is

(1) the fact that not all disc galaxies have bars was put forward as evidence that the discs must be embedded in massive halos before the existence of dark matter was widely accepted.

Now we can model dark matter halos better we discover that even with a dark matter halo, as long as that halo can absorb angular momentum (ie. rotate a bit) all discs will eventually make a bar. So my second favourite little fact is that

(2) we still don’t understand why not all disc galaxies have bars.

What this second fact means is that perhaps what I should really be doing is studying the galaxies you have identified as not having bars to figure out why it is they haven’t been able to form a bar yet. It should really be the properties of these which are unexpected….. We find that this is more likely to happen in blue, intermediate mass spirals with a significant reservoir of atomic hydrogen (the raw material for future star formation). In fact this last thing may be the most significant. Including realistic interstellar gas in computer simulation of galaxies is very difficult, but people do run what is called “smooth particle hydrodynamic” simulations (basically making “particles” of gas and inserting the appropriate properties). If they add too much gas into these simulations they find that bar formation is either very delayed, or doesn’t happen in the time of the simulation…..

Anyway I hope this has given you a flavour of what I find interesting about bars in galaxies. I think it’s fascinating that they give us a morphological way to identify a process which is so dynamical in nature. And it’s a very complex process, even though the basic physics (just orbits of stars) is very simple and well understood. Finally, I have become convinced though tests of the bars identified by you in Galaxy Zoo compared to bars identified by other methods, that if you want a clean sample of very large bars in galaxies that multiple independent human eyes will give you the best result. You are much less easy to trick that automated methods for finding galactic bars.

So thanks again for the classifications, and keep clicking. 🙂

Here’s a link to all blog posted tagged with “bars”.

9 responses to “What’s all the fuss about bars in galaxies?”