As we approach the 8th anniversary of the Galaxy Zoo project, it is a great opportunity to look back at one of the most fascinating discoveries of citizen science in Galaxy Zoo – the “Green Pea” galaxies. Volunteers on the forum first noted these galaxies due to their peculiar bright green color and small size. Their discovery was published in our 8th paper: ‘Galaxy Zoo Green Peas: discovery of a class of compact extremely star-forming galaxies’ and is noted on the blog here. But the story doesn’t end with their discovery. 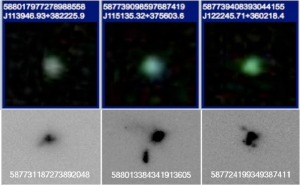 In the years since the publication of their discovery paper by the Galaxy Zoo Science Team, the Green Peas are beginning to fulfill their promise as a living fossil of galaxy evolution.  Because they aren’t too far away, they provide a unique local laboratory in which we can investigate processes key to the formation and evolution of galaxies in the early universe. They are living ‘fossils,’ undergoing extraordinary, intense starbursts unlike any other galaxies known in the local universe.   Their color is due to a large amount of emission in an oxygen line [OIII]/5007A that made their appearance green in the images.

Follow-up studies of the Green Peas have looked in great detail at their abundances of various elements, something that cannot be done in their high redshift analogs. The results of these studies show that they have energetic outflows of gas and lower oxygen abundances than other typical local galaxies with similar masses. They also suggest what might be responsible for ionizing the gas in the galaxies and producing those bright emission lines (e.g., Wolf-Rayet stars). Their clumpy morphologies (or shapes) have been confirmed and suggest that star formation in the peas occurs in several separate knots throughout the galaxy. Their radio emission implies they have strong magnetic fields, larger than that of the Milky Way. All of these results paint a picture of galaxies very similar to those that formed in the early Universe. 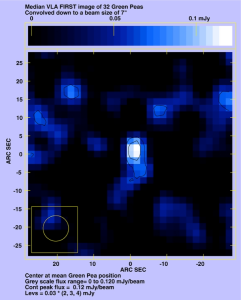 Results from studies of these galaxies can provide challenges to commonly accepted models. For example, the strong magnetic fields challenge models that suggest magnetic fields grow slowly over time and observations of the variation in Lyman alpha emission line profiles and strengths challenge models of the dependence of the emission line shape on gas properties in the galaxy. The Green Peas have held up their promise of lending new insights into galaxy evolution by characterizing an active mode of star formation, which contrasts with the typical more passive evolution dominating the local galaxy population. Studies of the Peas have suggested that a galaxy’s evolutionary pathway may depend on stochastic initial conditions, leading insights into our understandings of how galaxies throughout the Universe form.