Good news! Early this morning UK time, we submitted the paper describing the finished data release for the third iteration of Galaxy Zoo to the journal Monthly Notices of the Royal Astronomical Society. It’s taken an enormous amount of work to get to this point, in particular in understanding how to account for the effects of distance on classifications. Most of that work was done by Kyle Willett and Mel Galloway from the University of Minnesota (Kyle gave a sneak preview here), and it was finished just in time because Kyle leaves us tomorrow. 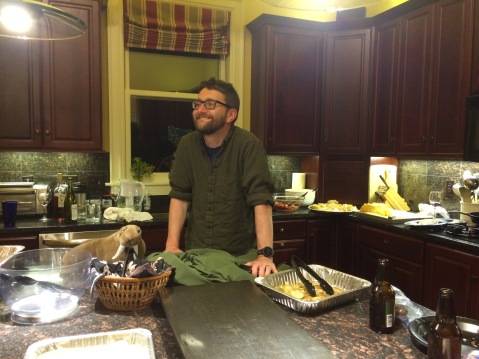 Kyle and friend at his leaving party.

Kyle has had an enormous impact on Galaxy Zoo since he came on board in 2011. As well as publishing papers on star formation and the enormous data release paper for Galaxy Zoo 2, he’s been the person making images, coordinating what’s seen on the site and keeping an eye on classifications as they’ve come in. Just as importantly, he’s been a prolific contributor to this blog, playing a leading role in keeping our important collaborators, the volunteers, in touch with what’s going on. It’s not just Galaxy Zoo, either, as Kyle has also played a critical role in the Radio Galaxy Zoo team, and has made major contributions to their recent papers too. He will be much missed by all of us, though we wish him well with his future endeavours.

One response to “Kyle’s Legacy”