I’m posting this on behalf of Amelia Frasier-McKelvie, a postdoc at the University of Nottingham, UK.

Hi – I’m Amelia, and I’m a postdoctoral researcher at the University of Nottingham. I work on galaxy evolution using the Mapping Nearby Galaxies at Apache Point Observatory (MaNGA) survey (and yes, I know it’s a contrived acronym!) MaNGA aims to observe 10,000 galaxies using integral field spectroscopy, which means instead of just obtaining one spectrum of a galaxy, we take several hundred at all different points across a galaxy. From this, we can infer interesting spatial information on galaxy properties. For example, we can see the regions in which star formation is occurring, or compare the ages of the stars in the bulge regions of a galaxy to the outer disk. By breaking down a galaxy into its components (such as bulge, disk, spiral arms, and bar) we can discover more about how the galaxy formed, and how it has led its life so far.

A MaNGA galaxy (image from SDSS imaging) with the area where spectra will be collected marked by the purple hexagon. Note the bar which is almost horizontal in this image.

I’m really interested in how bars affect their host galaxies. In particular, I’m looking for observational evidence that bars are involved in the quenching of star formation within a galaxy. This phenomenon is known as secular evolution/quenching. The one thing a galaxy needs to form stars is a reservoir of cool hydrogen gas. It’s been postulated that a bar can transfer matter (such as gas) radially inwards through a galaxy’s disk and into its central regions. If this is the case, then maybe it takes this gas required for star formation and funnels it towards the galactic centre, starving the disk, and ceasing star formation. Simultaneously, this gas that is funnelled into the central regions could either induce a final starburst, using up all gas, or feed an active galactic nucleus (AGN), which can heat the gas to a point where it cannot collapse to form stars.

If we wanted to catch a bar in the act of quenching a galaxy, we could look for tell-tale signs of this funnelling action, namely a difference in the age and chemical composition of the stellar populations in the bar region of a galaxy when compared to the disk.

Another MaNGA galaxy with a strong bar.

This is where Galaxy Zoo 3D comes in — I need to know where the bars actually lie in their host galaxies! Galaxy Zoo 3D citizen scientists mark out the bar (and spiral arm) regions of the MaNGA galaxy sample, which I can apply to our data cubes and extract spectra belonging to the galactic bar and disk regions. I can then analyse the bar and disk spectra separately and compare their properties. I’m interested in the global properties of a large sample of galaxies, so I need as many bar and disk region classifications as possible! 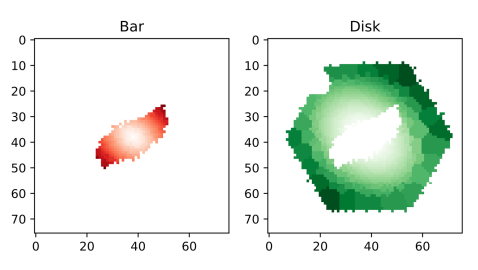 Masks made by GZ:3D showing the bar and disk (or not bar) regions of the above galaxy.

If I can find observational evidence that bars are helping to quench galaxies this will confirm the idea that internal secular evolutionary processes are important in galaxy evolution.

This will prove that along with external factors, internal structures such as bars are extremely important in determining a galaxy’s fate!

We hope you enjoyed hearing about how the masks made in Galaxy Zoo: 3D are being used. There’s still plenty of bars and lots and lots of spirals to mark in the project, so please join in if you’d like to help us complete our sample and help Amelia and others (including me!) with their research.