Hi, I’m Nico. I’m a 2nd year PhD student at the University of Minnesota studying galaxies. In particular, I use statistics and machine learning to extract useful information from ever-growing galaxy catalogs astronomers have assembled over the last few decades.

Today, I get to announce a completely new project by the Galaxy Zoo team!

Galaxy Zoo: Clump Scout is a citizen science project that will take a closer look at galaxies that were classified in the Galaxy Zoo 2 project. In that project, many of you answered questions for us about their shape, structure and properties. This time we’ll be examining them in an even more detailed way.

We are searching galaxies to find “giant star-forming clumps”, or just “clumps” for short. This is what astronomers call small regions within galaxies where stars are being born at a faster-than-usual rate. They are called “giant” in comparison to any individual star or group of stars — clumps can contain millions or even billions of stars — but they’re usually quite tiny compared to the galaxy containing them. The new stars formed in clumps are brighter and more densely packed than those in the rest of the galaxy, so when photographed, clumps tend to look like small glowing areas that stand out from the background. We call any galaxy with a region like this a “clumpy galaxy”. (And yes, we promise that the word “clump” will start to sound less silly with time.) 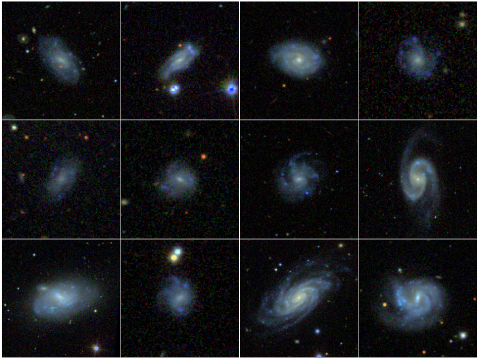 Figure 1: Some examples of clumpy galaxies that will appear in Galaxy Zoo: Clump Scout. In these images, clumps look like small, blue spots on the galaxies. Some of the clumps in these images are bright and obvious, while others take a bit more care to spot. All photos were taken by the Sloan Digital Sky Survey.

In the Clump Scout project, we are asking volunteers to look at galaxies and click on all the clumps they can see. This is a straightforward task, but many clumps require a keen eye to pick out. Once complete, your clicks will tell us where clumps are found in thousands of galaxies in the local universe. This will be one of the first large-scale studies of clumps in local galaxies, and I’m very excited to see what we find!

Clumpy galaxies have been a bit of a mystery for scientists for a while now. Astronomers have known of their existence for decades, but discussion about them really began in the late 1990s when the Hubble telescope began to capture images of very distant galaxies. Because light takes time to travel, we saw these distant galaxies as they existed billions of years ago, at a time when the universe was still young. As we studied Hubble’s images, we started to notice differences between the early galaxies and galaxies that exist today. One such difference: In the past, nearly ALL galaxies were clumpy! Discovering this was surprising, because most galaxies in the present-day universe do not have any clumps.

It’s not yet clear how clumps were formed, why they are vanishing over time, or exactly what fraction of galaxies contain clumps. What we do know is that clumps seem to change through time alongside the galaxies that contain them. As we come to better understand clumps, we hope to better understand the role they play in the growth and evolution of their host galaxies.

Part of the reason why Clump Scout is so exciting is that this is the first time human eyes will examine so many clumpy galaxies first-hand. Thanks to the help of citizen scientists, the Clump Scout project will be able to examine over fifty thousand galaxies. To speed things along, we have already filtered these galaxies with volunteer classifications from the Galaxy Zoo 2 project and picked out the subjects that volunteers marked as having “features”. By doing this, we eliminated nearly 200,000 galaxies that are very unlikely to contain clumps, leaving only more promising subjects.

We will also be testing to see which types of clumps volunteers are able to spot. There are certain clumps that are too faint to be seen no matter where they are, while others reside in bright regions of the galaxy which drown out their signal. To quantify these effects, we have taken some galaxy images and added a few of our own, simulated clumps on top. By marking these simulated clumps, you will provide us with a wealth of information about what types of clumps we can reasonably expect to find. For example, if volunteers mark a particular simulated clump 100% of the time, it is a good sign to us that a real clump like it would be found as well. On the other hand, if no volunteers see a simulated clump, we know that similar clumps are very unlikely to be found by this project.

Figure 3: An example galaxy before and after simulated clumps were added to it. On the right, a total of 5 extra clumps have been added, but several are too faint to be seen in this image.

Why can’t computers do this?

As with many citizen science tasks, identifying clumps is fairly easy for humans to do, but difficult for computers. There have actually been a few algorithms so far that could identify clumps with some success, but it’s an exceptionally difficult task to get right. Computers must be trained to ignore all the extraneous details in an image — including background galaxies, stars in our own galaxy, and galactic features like the central bulge — to find clumps among the competing signals. Luckily, this sort of task is second nature for human beings.

Computers also tend to be very bad at finding objects they aren’t specifically instructed to find. We hope that as this project proceeds, you’ll be able to help point out some exceptionally strange clumps, or even some features we do not expect at all. It was the keen eyes of Galaxy Zoo volunteers that led to the discovery of Green Peas, a class of galaxy that is still being researched today.

This project has been in the works for the last few years, and we’re very excited to see it launch. If you’d like to try it out, you can take part here.