Vote for the Cover Image of October “Astronomy and Geophysics”

We are pleased to announce an open vote for the cover image of the October 2013 issue of “Astronomy and Geophysics” (the magazine of the Royal Astronomical Society).

A write-up of the Specialist Discussion the science team ran at the Royal Astronomical Society in May on “Morphology in the Era of Large Surveys” is going to appear in the October issue of A&G , so we were asked to nominate a cover image for this issue.

Rather than just have the science team pick our favourite image, we thought it would be nice to open up the choice to our volunteers. After all it’s you that make Galaxy Zoo special, and a unique way of dealing with morphology in the era of large surveys.

So we have put together five images for you to vote on. These are images which would make good covers for the magazine, and which the science team think either have a special connection to the Galaxy Zoo project, or illustrate something special about Galaxy Zoo and its contributions to the understanding of galaxy evolution. Subject to final approval by the editors, the image that wins this vote will appear on the cover of A&G for October 2013.

1. Hanny’s Voorwerp – Nominated by PI of the Zooniverse, Chris Lintott (@chrislintott): “Hanny’s Voorwerp is the iconic Galaxy Zoo discovery, the find that demonstrated that as well as systematically classifying galaxies volunteers could serendipitously find marvelous things. A galaxy-scale glowing cloud of hot gas, it tells us that IC 2497, its neighbour, was home to a rapidly feeding black hole perhaps as recently as 50,000 years ago. Hanny’s find inspired astronomers all over the world to point their telescopes at it, and a search for similar objects which has paid spectacular rewards.” 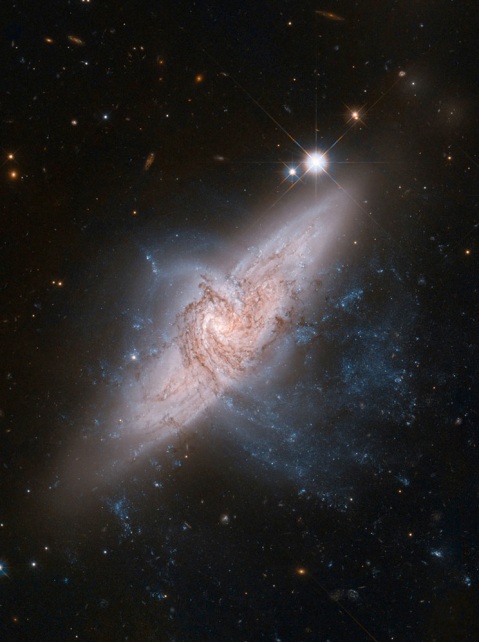 2. NGC 3314 – Nominated by GZ Science Team Member Bill Keel (@NCG3314): “NGC 3314 is a rare superposition of galaxies at different distances, allowing us to measure the effects of dust in the foreground galaxy with unusual clarity. Galaxy Zoo participants made a powerful contribution to this kind of science, by helping to select a catalog of nearly 2000 overlapping-galaxy pairs, many of which have been the targets of further study to help understand how the content and distribution on galaxies change with galaxy structure and size. Furthermore, they are just plain cool.”

3. NGC 1365 – Nominated by GZ Project Scientist, Karen Masters (@KarenLMasters): “NGC 1365 is beautiful big barred spiral galaxy in the Fornax constellation. Galaxy Zoo classifications of bars in spiral galaxy have contributed to a growing realisation of the important role bars play in the evolution of galaxies, including a possible role in turning spirals red.” 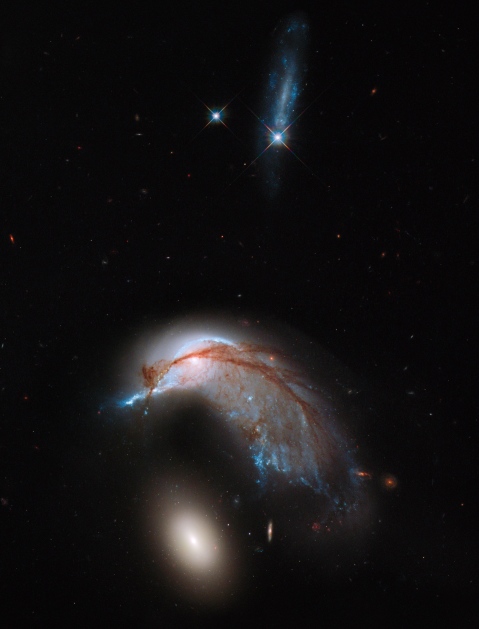 Arp 142, aka the Penguin Galaxy – Nominated by GZ Forum and Talk moderator, Alice Sheppard (@penguingalaxy), who treasures this as her first interesting find from when Galaxy Zoo was first born. Illustrating the fun side of Galaxy Zoo, which involves a zoo of galactic animals and an alphabet of galactic letters, the “penguin” resembles a bird admiring its egg. It was first classified by Halton Arp as a peculiar galaxy: a spiral with lanes of dust and star formation bent out of shape by the intense gravity of an elliptical, and more recently imaged by the Hubble Space Telescope and horrifyingly mis-species-ed by APOD as a porpoise.

5. The Sombrero Galaxy – Nominated by Rob Simpson (@orbitingfrog) from the Zooniverse: “The Sombrero galaxy illustrates really well that galaxies aren’t just filled with stars but also dust. In the Sombrero you can see the thin ring of dust neatly contained inside the disk. This is where the raw material for star formation comes from and we can probe this colder stuff using infrared and submillimetre telescopes. ” The Sombrero also illustrates than not all galaxies fall simply into either spiral or elliptical categories.

Galaxy Zoo in this week's Guardian

Just a quick note to let you know that there’s a very nice story about Galaxy Zoo, it’s beginnings and citizen science in general in the Guardian: http://www.guardian.co.uk/science/2012/mar/18/galaxy-zoo-crowdsourcing-citizen-scientists

It features, amongst others, our very own Alice (@penguingalaxy) and Hanny (@hannyvanarkel). For more late-breaking Galaxy Zoo news, why not follow us on Twitter (@galaxyzoo)?