Curiouser and curiouser – Hubble and Mkn 1498

Fresh off the telescope, here’s a first view of the “Voorwerpje” gas clouds around the Seyfert galaxy Markarian 1498. Its nucleus, shown in our Lick and Kitt Peak spectra, is a type 1 Seyfert, meaning that we see the broad-line region of gas very close to the central black hole, moving at high velocity. Those data showed highly-ionized gas to a radius of at least 20 kiloparsecs (65,000 light-years). Its nucleus is too dim to account for the ionization of the extended gas clouds, which landed it a spot in our list of seven objects for the Hubble proposal. Getting these data now was an unexpected treat – they were originally scheduled to be taken next November. As another bonus, the good people at the Space Telescope Science Institute just last week implemented the software to deal with charge-transfer problems in the Advanced Camera CCDs, right in the pipeline, improving the image quality a lot (it took months to get to this point with the Hanny’s Voorwerp data). And here it is, Markarian 1498 in a combination of [O III] emission (green) and Hα (red): 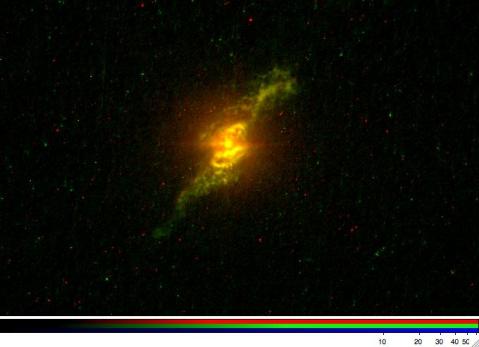 This is… interesting. From the few of these galaxies where we have data so far, loops of ionized gas near the nucleus may be a recurring theme. I could add speculations on what we’re seeing in Mkn 1498 – but for now, I’ll just let everyone enjoy the spectacle.

2 responses to “Curiouser and curiouser – Hubble and Mkn 1498”