Last October, Galaxy Zoo began including new images from the UKIDSS survey on the main site. These are many of the same galaxies that were classified in GZ2, but the images come from a completely different telescope and a different wavelength — the infrared. While there’s a lot of science we’ll be able to do comparing galaxy morphologies at different wavelengths, many volunteers have noticed artifacts (features that aren’t real astronomical objects) in the UKIDSS images that can look very different from what you’re used to seeing in the SDSS or Hubble images:

These are only a small percentage of the images we’re looking at, but it’s important to identify them and try to separate them cleanly from the galaxies we’re classifying. So here’s our “spotter’s guide” to UKIDSS image artifacts.

All of the UKIDSS images you see in Galaxy Zoo are what we call “artificial-color” — we use images captured by the telescope’s infrared detector, and then combine the different infrared wavelengths into a single color image. For our images, we use data from the Y-band filter (1.03 microns) for the red channel, J-band filter (1.25 microns) for green, and K-band (2.20 microns) for the blue channel.

The images in Y, J, and K were taken at separate times and with different detectors and filters. So for changes in either the camera or the sky, these will often only show up in one color in the GZ images.

Some users have identified a persistent pattern in the images that looks like four little green pixels arranged in a square (looks a little like the UKIDSS logo!). This is from the J-band images.

The origin of the squares comes from the way that UKIRT processes data. Each patch of the sky is imaged in multiple exposures, and then these exposures are combined to get the final, deeper image. So each pixel in the image comes from four different locations on the detector. In the case of J-band images, the telescope actually took 8 different exposures during the dither pattern. For a few of the observing runs, the telescope lost the guidestar which keeps it positioned at the correct location; that means that the expected number of counts at the position of a bright star is lower due to the bad frame in the interlaced data. Normally, the software algorithms in UKIDSS drop the bad frames and correct for this effect; as GZ volunteers have identified, though, there are some cases where it didn’t work perfectly. (Many thanks to UKIDSS Survey Scientist Steve Warren at Imperial College London for his help in explaining this phenomenon.)

Since the exposure pattern is in a square, the bad pixels will show up where there’s a bright star and one of the four frames is bad (meaning counts are lower than they should be). That’s the origin of the pattern showing up in some images. 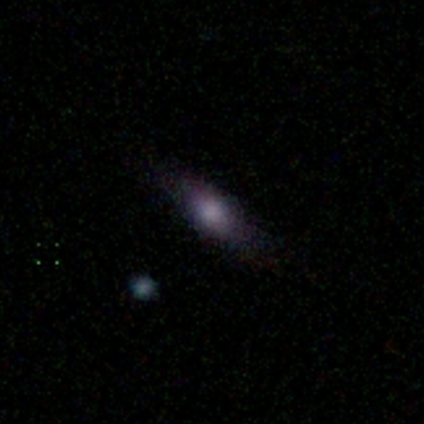 The four green dots in a square pattern on the left side of the image are from a single bad frame in the J-band processing of the data.

As mentioned above, the telescope takes multiple exposures for each part of the sky that it images. To improve this, for some of the bands, it images the same part of the sky for a second round, but offsets the location of these by either an integer or half-integer pixel. The reason for this is so we can improve the angular resolution of the telescope – that is, distinguishing small features in the galaxy that are normally blurred out by either the Earth’s atmosphere or the limiting power of the telescope itself.

In the final data products, images from these offset frames are combined onto a fixed pixel scale in a process called interleaving. In some sources (bright ones especially), the gridding isn’t perfect and you can see some of the scale for this in the images. 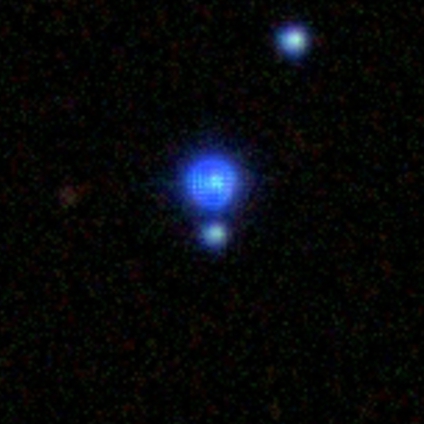 Gridding pattern (the square pixels at the center of the bright blue star) are due to the interleaving process of combining data.

Another feature people have spotted are what have been called “ghosts”: these can be either regular or irregularly shaped objects appearing in a couple specific colors. There might be multiple causes for these, but one of the most common is the presence of an actual contaminant (a speck of dust, for example) that got into the optics of the telescope. Since the telescope isn’t designed to focus on nearby objects, the point source is distorted, usually into a ring-like shape. The color of these images, like the green squares, depends on what band they were imaged in; red for Y-band, green for J-band, or blue for K-band.

Here’s one example: you can see the green and blue ring to the right of the galaxy in the color GZ image. The raw data (in black and white) shows the same ring in multiple locations, which tells us that it remained in the same position on the detector, but appears several times as the telescope moves over the sky. 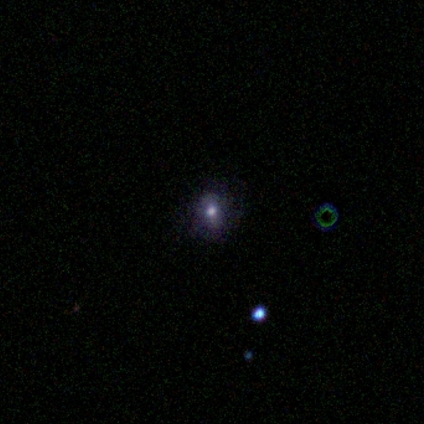 This image has an artifact (blue/green ring) to the right of the spiral galaxy AGZ00077ec.

The raw Y-band image of the data shows the same artifact appearing multiple times as the telescope tracks across the sky.

We hope this has been useful, but please continue to discuss these in Talk and on the forums; particularly if there are any artifacts that impede your ability to make a good galaxy classification. Happy hunting, and thanks for continuing to participate with us on Galaxy Zoo.