75% done with the conference. Still not sick of pasta yet.

Day 3 of the Bologna workshop on extragalactic radio surveys started with a session on the most massive structures in the Universe: galaxy clusters. These collections of galaxies within massive dark matter haloes show up in radio surveys in several different ways: these include radio haloes, which are diffuse large-scale emission regions not associated with a particular galaxy; radio relics, which are similar features but found at the edge of clusters and likely driven by shock waves, and individual radio galaxies found within and nearby these clusters. Reinout van Weeren (Harvard/CfA) gave a really interesting talk on measuring the spectral index in radio relics; this means measurements of the ratio of the radio luminosity at different frequencies, similar to the way color is defined at optical wavelengths. Changes in the radio spectral index trace variations in turbulence in the intracluster medium, or possibly changes in magnetic fields; the fact that radio relics in many clusters have very different spectral index maps is a puzzle that makes it difficult to explain them with a single model. 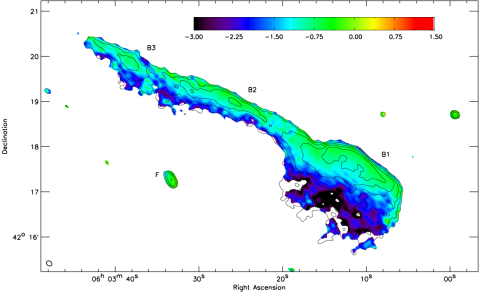 We also had the second poster session of the conference, including another Radio Galaxy Zoo result! The poster was led by RGZ science team member Minnie Mao (Joint Institute for VLBI in Europe), titled “Here Be Spiral DRAGNs”. Jean Tate, Minnie Mao, and several RGZ volunteers and science team members have been using RGZ to search for radio-loud AGN whose host galaxy is a spiral.* The acronym “DRAGN” stands for “double-lobed radio source associated with galactic nuclei”. These are extremely rare objects – the number of confirmed spiral DRAGNs discovered so far can be counted on your fingers – but really interesting. The standard physical model for how double-lobed, powerful radio sources are generated are triggered by mergers between galaxies and ultimately their black holes. In the process, a major merger disrupts and destroys the disk of the galaxy, resulting in an elliptical – this theory would predict that we see double radio AGN exclusively in massive ellipticals. That’s mostly true, but the existence of exceptions are fascinating and force astronomers to consider alternatives or extensions to the merger driven hypothesis. Minnie and Jean are going through a sample preliminarily assembled in RGZ to try and identify more candidates like these.

One more day to go!

*Changed wording on 24 October 2015 to emphasize the roles played by both volunteers and the science team.