Yesterday was the second day of the workshop in Bologna on extragalactic radio surveys, where I’m attending and gave a talk on Radio Galaxy Zoo. We had three major blocks of talks yesterday: one on galaxy evolution, one on cosmology, and the final one on exploiting synergies between radio telescopes.

Galaxy evolution is a big topic, and one that drives a lot of the science behind both Galaxy Zoo and Radio Galaxy Zoo. Several of the talks really highlighted the importance of having multiwavelength data, in addition to what we learn from the radio (this is one of our main goals identifying the optical counterpart in our project). A couple of the most famous deep fields which have been studied in radio were discussed, including the VLA-COSMOS study, GOODS-North, and the Hubble Deep Field.

Poster showing the entire field and some zoomed-in radio sources from the VLA-COSMOS project. http://www.mpia.de/COSMOS/

Data from new telescopes, like the low-frequency LOFAR, are yielding some exciting results. One interesting result was the fact that lower-mass galaxies more commonly hosted active galactic nuclei (AGN) seen in the radio in the early Universe, at redshifts of 1 < z < 2. Galaxies with higher masses, however, had about the same fraction of radio-loud AGN at this time. It’s interpreted as being the result of more galaxies accreting matter in what’s known as “cold” or “radiative mode”, thanks to the increase in the supply of cold gas available to galaxies at earlier times (Wendy Williams, U. Hertfordshire).

Cosmology is probably being a bit underrepresented at this conference, since we only had three talks in this session. A lot of the focus was on how detecting very large samples of galaxies (both in radio continuum, like the FIRST and ATLAS surveys in RGZ data, as well as looking at spectral lines like the 21-cm hydrogen line) constrain our cosmological models. Different parameters for both dark energy and dark matter make specific predictions for how populations of galaxies evolve, including their numbers, distributions of sizes and masses, and geometrical arrangement. You can also test cosmology through gravitational lensing at radio wavelengths. It’s promising, but very challenging compared to how it’s done in optical wavelengths due to difficulties in fitting shapes in the raw visibility data (Prina Patel, U. Western Cape).

One of the talks I found really interesting (and new to me) was by Emma Storm, from GRAPPA/U. Amsterdam. She gave a great presentation on how radio observations explore the nature of dark matter. While we don’t know a huge amount about the nature of the dark matter particle, one prominent theory predicts that when they collide, the particles annihilate and produce other particles in the Standard Model that we can directly observe (like pions and gamma rays). If that’s so, then these annihilations would also produce charged particles like electrons and positrons; when those particles are accelerated in magnetic fields, they emit synchrotron radiation, which we detect in the radio. So by looking for radio emission in objects that we expect to be dominated by dark matter (like galaxy clusters), scientists can constrain the parameters of their dark matter models, particularly things like the cross-section. The signal this would produce is expected to be diffuse and weak, though; Emma’s work doesn’t detect radio emission in many clusters, but places important upper limits on the amount that could be there within the detection limits. 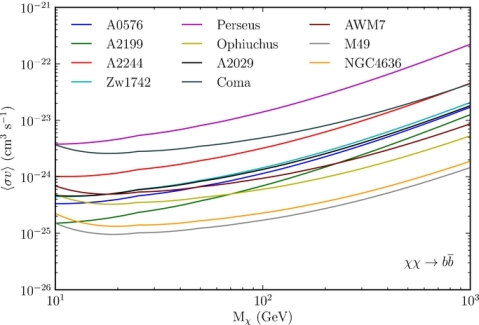 Limits on dark matter annihilation cross sections as a function of the particle’s mass. Each curve is an upper limit based on radio observations of a galaxy cluster (from Storm et al. 2013).

The last session of the day dealt with synergy and commensality. I normally hate things that sound like business-speak buzzwords, but in this case it is really important – we have a number of new radio telescopes coming online now or in the next several years, such as ALMA in Chile, LOFAR in Europe, and the Square Kilometer Array in Australia and South Africa. It’s quite important to plan the capabilities and designs of each so that we don’t repeat work unnecessarily, maximize the scientific output, and try to make the data and results available to as many people as possible.

Halfway over already! You can also follow what some of the other people have been discussing at the conference at the hashtag #radsurveys15.