We submitted the Galaxy Zoo CANDELS paper in May. Now, after some discussion with a very helpful referee, the paper is accepted! I hope our volunteers are as thrilled as I was to get the news. It happened within days of the Galaxy Zoo: Hubble paper acceptance. Hurray!

Spot the typo! (No, just kidding.) (Well, sort of. There is one, but it’s not easy to find and it’s pretty inconsequential.) This is not quite the longest paper I’ve ever written, but it is the longest author list I’ve ever been at the top of. It includes both Galaxy Zoo and CANDELS scientists. And the volunteers are acknowledged too, in that first footnote. A lot of people did a lot of work to bring this together.

If you’d like to read the paper, it’s publicly available as a pre-print now and will be published at some point soon in the Monthly Notices of the Royal Astronomical Society. The pre-print version is the accepted version, so it should only differ from the eventual published paper by a tiny bit (I’m sure the proof editor will catch some typos and so on).

The paper may be a little long for a casual read, so here’s an overview: 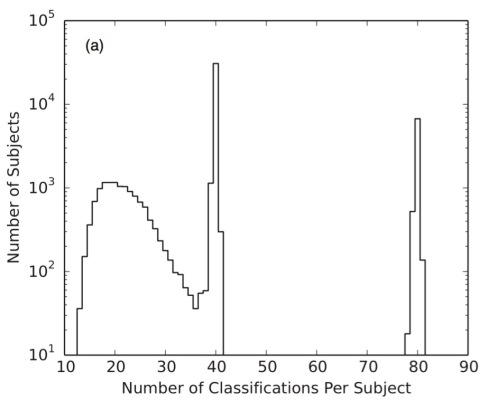 Most subjects have 40 classifications apiece, although some were retired early from active classification and others were classified further, until about 80 volunteers per galaxy had told us what they thought. 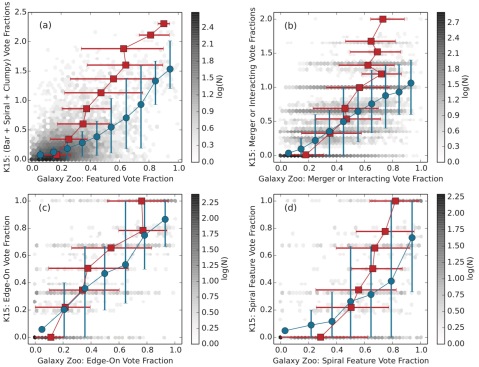 We devote an entire section of the paper to comparing with the CANDELS-team classifications (from Kartaltepe et al. 2015, which we abbreviate to K15 in the paper). The bottom line: the classifications generally agree, and where they don’t we understand why. Sometimes it’s because there’s interesting science there, like mergers versus overlaps. The greyscale shading is a 2-D histogram; the difference in the blue versus red points is in which axis was used to separate the galaxy into bins so that the average trends could be computed.

With the data releases of Galaxy Zoo: Hubble and Galaxy Zoo CANDELS added to the existing Galaxy Zoo releases, your combined classifications of over a million galaxies near and far are now public. We’ve already done some science together with these classifications, but there’s so much more to do. Thanks again for enabling us to learn about the Universe. This wouldn’t have been possible without you.