I’m incredibly happy to report that the main paper for the Galaxy Zoo: Hubble project has just been accepted to the Monthly Notices of the Royal Astronomical Society! It’s been a long road for the project, but we’ve finally reached a major milestone. It’s due to the efforts of many, including the scientists who designed the interface and processed the initial images, the web developers who managed our technology and databases, more than 80,000 volunteers who spent time classifying galaxies and discussing them on the message boards, and the distributed GZ science team who have been steadily working on analyzing images, calibrating data, and writing the paper.

The preprint for the Galaxy Zoo: Hubble paper is available here. The release of GZH also syncs up with the publication of the Galaxy Zoo: CANDELS catalog, led by Brooke Simmons; she’ll have a blog post up later today, and the GZC paper is also available as a preprint. 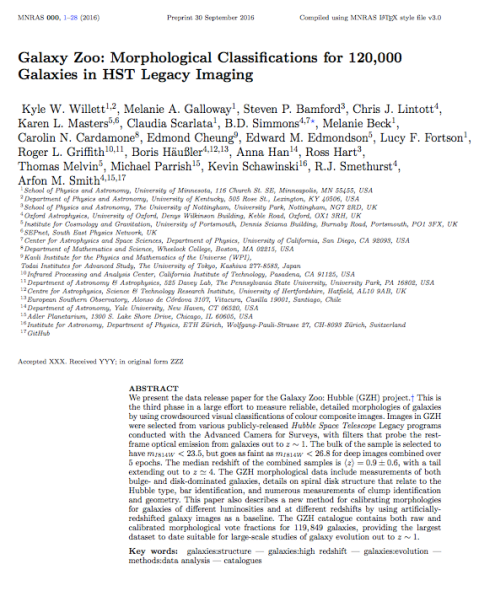 Galaxy Zoo: Hubble began in 2010; it was the first work of GZ to move beyond the images taken with the Sloan Digital Sky Survey (SDSS). We were motivated by the need to study the evolution and formation of galaxies billions of years ago, in the early days of the Universe. While SDSS is an amazing telescope, it doesn’t have the sensitivity or resolution to make a quality image of a typical galaxy beyond a redshift of about z=0.4 (distances of a few billion parsecs). Instead, we used images from the Hubble Space Telescope, the flagship and workhorse telescope of NASA for the past two decades, and asked volunteers to help us classify the shapes of galaxies in several of Hubble’s largest and deepest surveys. After more than two years of work, the initial set of GZH classifications were finished in 2012 and the site moved on to other datasets, including CANDELS, UKIDSS, and Illustris.

So why has it taken several years to finish the analysis and publication of the data? The reduction of the GZH data ended up being more complicated and difficult than we’d originally anticipated. One key difference lies in our approach to a technique we call debiasing; these refer to sets of corrections made to the raw data supplied by the volunteers. There’s a known effect where galaxies that are less bright and/or further away will appear dimmer and/or smaller in the images which are being classified. This skews the data, making it appear that there are more elliptical/smooth galaxies than truly exist in the Universe. With SDSS images, we dealt with this by assuming that the nearest galaxies were reliably measured, and then deriving corrections which we applied to the rest of the sample.

In Galaxy Zoo: Hubble, we didn’t have that option available. The problem is that there are two separate effects in the data that affect morphological classification. The first is the debiasing issue just mentioned above; however, there’s also a genuine change in the populations of galaxies between, say, 6 billion years ago and the present day. Galaxies in the earlier epochs of the Universe were more likely to have clumpy substructures and less likely to have very well-settled spiral disks with features like bars. So if we just tried to correct for the debiasing effect based on local galaxies, we would have explicitly removed any of the real changes in the population over cosmic time. Since those trends are exactly what we want to study, we needed another approach.

Our solution ended up bringing in another set of data to serve as the calibration. Volunteers who have classified on the current version of the site may remember classifying the “FERENGI” sample. These were images of real galaxies that we processed with computer codes to make them look like they were at a variety of distances. The classifications for these images, which were completed in late 2013, gave us the solution to the first effect; we were able to model the relationship between distance to the galaxy and the likelihood of detecting features, and then applied a correction based on that relationship to the real GZH data.

Top: Example of a galaxy image processed with FERENGI to make it appear at a variety of distances. Bottom: Calibration curves based on FERENGI data that measure the effect of distance on morphological classification. From Willett et al. (2016).

The new GZH data is similar in format and structure to the data release from GZ2. The main product is a very large data table (113,705 rows by 172 columns) that researchers can slice and dice to study specific groups of galaxies with morphological measurements. We’re also releasing data from several related image sets, including experiments on fading and swapping colors in images, the effect of bright active galactic nuclei (AGN), different exposure depths, and even a low-redshift set of SDSS Stripe 82 galaxies classified with the new decision tree. All of the data will be published in electronic tables along with the paper, and are also downloadable from data.galaxyzoo.org. Our reduction and analysis code is available as a public Github repository.

The science team has already published two papers based on preliminary Galaxy Zoo: Hubble data. This included a paper led by Edmond Cheung (UCSC/Kavli IPMU) that concluded that there is no evidence connecting galactic bars and AGN over a range of redshifts out to z = 1.0. Tom Melvin (U. Portsmouth) carefully examined the overall bar fraction in disks using COSMOS data, measuring a strong decrease in bar fraction going back to galaxies 7.8 billion years ago. We’re now excited to continue new research areas, including a project led by Melanie Galloway (U. Minnesota) on the evolution of red disk galaxies over cosmic time. We hope GZH will enable a lot more science very soon from both our team and external researchers, now that the data are publicly released.

A massive “thank you” again to everyone who’s helped with this project. Galaxy Zoo has made some amazing discoveries with your help in the past eight years, and now that two new unique sets of data are openly available, we’re looking forward to many more.