Hey volunteers! This is Mel G from the Minnesota science team, and I’m excited to announce the launch of the second set of FERENGI images on Galaxy Zoo today!

Some of you may remember classifying the first batch of FERENGI images back in 2013. For new volunteers, or experienced volunteers who need a refresher, FERENGI is a code that takes an image of a nearby galaxy and produces a new, simulated image of what that galaxy would look like if it was actually much farther away. 288 galaxies that were already classified by Galaxy Zoo volunteers were selected to be “ferengified” in that first sample; from these, 6,624 images were created of these galaxies at different distances and brightnesses. With your help, all images were classified and used to measure how distance affects classifications, which enabled us to debias and finally release the Galaxy Zoo: Hubble catalog just last month! 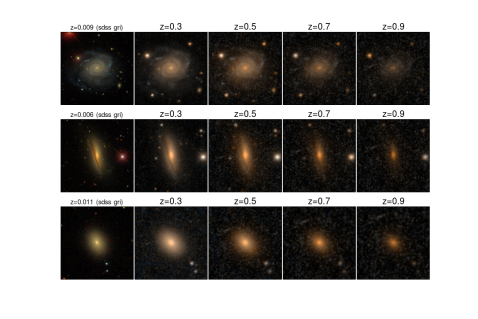 Recently, I found another use for these FERENGI classifications as I worked on my project on red disk galaxies, which will go into my PhD thesis to be completed this summer (coming up soon, yikes!). For this project I’ve been using data from Galaxy Zoo: Hubble to study the transformation of star-forming disk galaxies into non star-forming (aka “dead”) ellipticals between now and 6 billion years ago. Part of this research involves tracking the galaxy colors over time, which are indicators of whether the galaxies are still forming stars or not. A common way to distinguish star-forming galaxies from dead galaxies is to use a color-color diagram (this blog post goes into the details quite well, for the interested!). The short version is that galaxies in the upper-left of this plot, the “red sequence”, are no longer forming stars, and the lower-right portion, the “blue cloud”, are still producing lots of new stars. Typically the blue cloud is full of disk galaxies and the red sequence is full of ellipticals, but that statement is not 100% true;  there are actually quite a few disk galaxies mixed in with ellipticals up in the red sequence. We think these might represent a “transition” stage between blue/active disks and red/passive ellipticals, and studying how this population evolves with time will tell us more about how the shutting down of star formation is related to the morphological transformation.

What does this have to do with FERENGI? Well, detecting disk galaxies at high redshift is pretty hard – as we learned during the data reduction of the GZH catalog. Using raw Galaxy Zoo classifications, disks tend to be classified very similarly to ellipticals if they are very far away, so the number of disks we count is probably smaller than the true value. Using the FERENGI data, however, we can predict how many disks we should be detecting as a function of distance, and use that information to adjust the numbers of disks we count in the real Hubble data! The catch is that since galaxies with different colors tend to look a little different on average, it’s important to measure this incompleteness for both the red sequence and the blue cloud galaxies. Here comes the problem: in the original FERENGI sample,only 44 of the 300 galaxies have color data, leaving only 9 red sequence and 36 blue cloud galaxies to study. Unfortunately those numbers are too small to get a good measurement!

color-color plots of the original and Ferengi-2 samples

So, as a sequel to the original FERENGI project, and as motivation to take proper measurements of red disks over time for my thesis, I’ve created FERENGI-2: a new set of FERENGI images from 936 galaxies. Each has been ferengified to 8 different distances, producing a total of 7,488 images that I need your help classifying. As you can see in the color-color plots here, these classifications will allow me to measure incompleteness for 388 galaxies in the red sequence (previously only 9) and 548 galaxies in the blue cloud (previously 36). This increase in data is huge, and will help not only the completion of my thesis, but many future projects that benefit from debiasing of Hubble data. Thanks again for your help!