I’m delighted to announce the acceptance of another paper based on your classifications at Galaxy Zoo, “Galaxy Zoo: Unwinding the Winding Problem – Observations of Spiral Bulge Prominence and Arm Pitch Angles Suggest Local Spiral Galaxies are Winding”, which has just been released on the arxiv pre-print server, and appear in the Monthly Notices of the Royal Astronomical Society (MNRAS) soon.

Here’s the title and author page.

This paper has been a long time coming, and is based significantly on the excellent thesis work of Ross Hart (PhD from Nottingham University). Ross wrote about some of his work for the blog previously “How Do Spiral Arms Affect Star Formation“. One of the things Ross’s PhD work showed was just how good your identification of spiral arm winding is, and that allowed us to be confident to use it in this paper.

You might notice the appearance of some of your fellow citizen scientists in this author list. Dennis, Jean and Satoshi provided help via the “Galaxy Zoo Literature Search” call which ended up contributing significantly to the paper.

Our main result is that we do not find any significant correlation between how large the bulges are and how tightly wound the spirals are in Galaxy Zoo spiral galaxies…. this non-detection was a big surprise, because this correlation is discussed in basically all astronomy text books – it forms the basis of the spiral sequence described by Hubble.

The Hubble Tuning Fork illustrated with SDSS images of nearby galaxies.

Way back in 1927 Hubble wrote (about the spiral nebula he had observed) that: “three [properties] determine positions in the sequence: (1) the relative size of the unresolved nuclear region, (2) the extent to which the arms are unwound (the openness or angle of the spiral), (3) the degree of condensation in the arms.” He goes on to explain that “These three criteria are quite independent, but as an empirical fact of observation they develop in the same direction, and can be treated as various aspects of the same process.” (i.e. Hubble observed them to be correlated).

It’s been known for a long time that there are examples where bulge (or “unresolved nuclear region”) size and arm winding did not agree, but these are usually treated as exceptions. What we’ve shown in this paper, is that for a sample selection which goes beyond just the brightest nearby galaxies Hubble could see, the correlation is not strong at all. Below is an annotated version of our main result figure – each point is a spiral with Galaxy Zoo classifications, and the contours show where there are lots of points. We find spirals all over this plot (except not many with big bulges and loosely wound arms), and the red and blue lines show the lack of any strong trend in either direction. 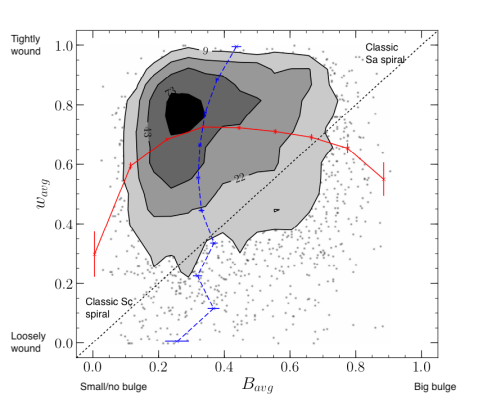 This has significantly implications for how we interpret spiral winding angles, and could be explained by many/most spiral arms winding up over time (at rates which depend on the bulge size) rather than being density waves. We need to do more work to really understand what this observation tells us (which is a great place to be in science!).

We have also known for a while, that bulge size correlates best with modern expert galaxy classification on the Hubble sequence (e.g. when we compared you classifications to the largest samples done in that way).  So another point we make in this paper is how different these modern classifications are to the traditional classifications done by Hubble and others. That’s OK – classifications should (and do) shift in science (part of the scientific method is to change on the basis of evidence), but it does mean care needs to be taken to be precise about what is meant by “morphology of galaxies”.

I ended the abstract of the paper with: “It is remarkable that after over 170 years of observations of spiral arms in galaxies our understanding of them remains incomplete.” and I really think that’s a good place to end. Galaxy morphology provides a rich source of data for understanding the physics of galaxies, and thanks to you we have access to the largest and most reliable set of galaxy morphologies ever.

If you’re inspired to keep classifying, head over to the main Galaxy Zoo project, or why not draw a few spiral arms over at Galaxy Zoo: 3D where we’re trying to understand spiral arms in more detail.