From April 2018 until early this year, Galaxy Builder has collected over 18,000 models of spiral galaxies, built by volunteers. These models were combined and computationally fine-tuned, and the results have been compiled into Lingard et al. 2020 recently accepted for publication in the Astrophysical Journal.

The project asked volunteers to sequentially add components to a galaxy, starting with the galaxy’s disc, then, if one is present, a bulge and a bar, followed by tracing any visible spiral arms. At each stage, light from the corresponding component would be removed until the whole galaxy was accounted for:

Four-panel figure showing the galaxy builder interface, a spiral galaxy is visible in blue, and in each panel another component is added to gradually remove all the visible light from the galaxy.

After collecting 30 volunteer models for each galaxy, we then used Machine Learning techniques to cluster components, and identify a “consensus model”.

Four panel plots showing the clusterd and consensus components for an example galaxy. There is a small amount of scatter in each component, but the clustering has reliably found a good result.

We then used a computer fitting algorithm to fine-tune this model, resulting in a detailed description of the galaxy’s light distribution, which we can use to understand the physical processes occurring inside it!

Five panel plot showing an image of the example galaxy, the fitted model (which matches the real galaxy very well), the difference between the galaxy and model (which is small), and how the consensus components from clustering have changed during fitting (they do not change very much)

We have shown that galaxy model created in this way are just as reliable as simpler models obtained purely through computer fitting (when those simple models are appropriate!), by comparing to other published work and by incorporating a small sample of synthetic galaxies, for which we know the true light profiles: 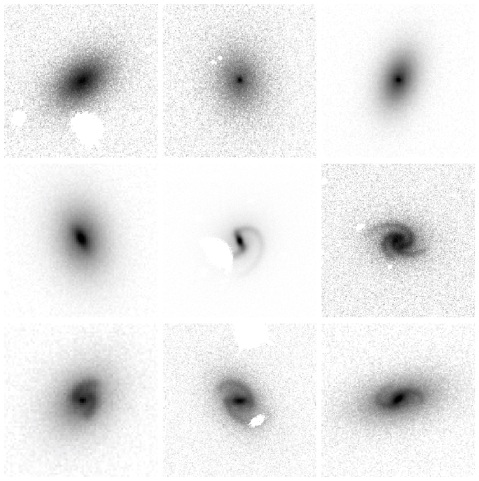 The nine synthetic galaxy images, each of which look very realistic (but without clumpy star-forming regions). Most have spiral arms, and some have bars.

For most parameters, the difference between the true (x-axis) and volunteer-provided (y-axis) values is tiny. There are some issues with bar “boxyness” and bulge concentration (Sérsic index), primarily due to the computer fitting algorithm not being able to distinguish between different combinations of values:

Scatter plots showing how well parameters are recovered. We see that the method generally does a very good job, but there is a lot of scatter in bulge sersic index and bar boxyness.

Thanks to the added complexity of Galaxy Builder models, we have a much richer source of information for scientists to delve into! We’re excited to share the scientific results we’ve obtained, expect another post in the not-too-distant future (hint, spiral arms are complicated)!

The research team want to send a very warm thank-you to everyone who has participated in this project over the years. Without your efforts we would not have had the chance to do the science we are so passionate about, and we are very excited for the future of the Zooniverse.

This blog was posted on behalf of Tim Lingard for the Galaxy Builder Team. Tim also submitted his PhD thesis based on this work this summer, and is now working as a Data Analyst for the 1715 Labs.