Since the original launch of the Sloan Digital Sky Survey (SDSS) in 2000, the data from the project has been released to the public on a timescale of every year or two. These Data Releases include both new observations from the telescope, as well as refinements to old data based on improving the processing and reduction routines.

Today, Sloan announced that Data Release 10 (DR10) is now available to both the general astronomy community and to the public. It contains the first release of spectra from the APOGEE experiment, which has been observing tens of thousands of red giant stars in the Milky Way. It also includes new data from BOSS, which has been measuring redshifts for distant galaxies in order to measure cosmological parameters and study structure formation. 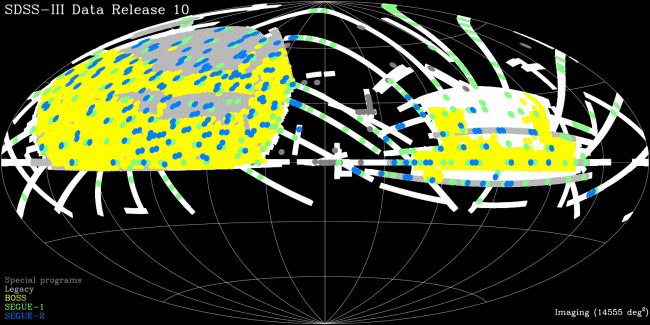 Sky coverage of the SDSS data contained in DR10

The original data from Galaxy Zoo was included in the SDSS Data Release 8. That’s quite important for a couple of reasons. It makes it much easier for scientists to use the GZ data, since SDSS uses this as the input for their own database, called CasJobs. This database enables matching of morphologies to other properties of the galaxies that SDSS measures, such as color or size. It also provides one of the main means of access to the data for people who aren’t members of the Galaxy Zoo team. Finally, it’s a validation that your GZ classifications have become a core data product of the survey, and something which is worth preserving and sharing as widely as possible.

In DR10, we’re happy to announce that data from Galaxy Zoo 2 is available for the first time. The reduction and description of the data is covered in a recent paper, which received a very favorable referee report a couple of weeks ago and will be resubmitted soon. We’ll share the paper as soon as it’s been formally accepted. The GZ2 data will also be hosted on our own site within Galaxy Zoo in the near future. 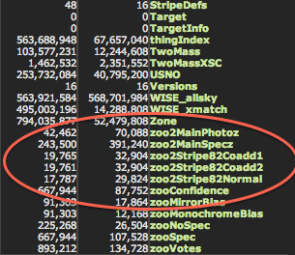 Please check out DR10 if you’re interested in peeking at the GZ2 data – do acknowledge both Willett et al. (GZ2) and Ahn et al. (DR10) if you end up using it, though. Congratulations to the SDSS team on this new release!