Merger Zoo has come to a close.

Since the project started, we have had over 27,000 volunteers contributed their time supporting this project.   Volunteers have reviewed over 3 million simulations.  Out of this huge number of new simulations, we have been able to find the best models for each of 60 different merging galaxy systems using the data you generated in the Merger Wars and Simulation Showdown interfaces.

The two images above show an overlay for two of the best simulation from Merger Zoo.   As the image fades between the simulation and the astronomical image, you can see how closely we matched the shapes of the real Merging Galaxies.   Of course, the underlying purpose of this Merger Zoo was not to make pretty models.   We are now in the process of analyzing the incredibly rich data set that has been generated to address a number of scientific questions.

The first paper we are working on addresses a simple question – how well can the orbit of the mergers be constrained from the shape of the tidal features?   For decades we have been assuming that there is a true “best fit” orbital match for interacting galaxies.    However, Merger Zoo has directly put this to a test.   As an example, take a look at the plot below.    The red line shows the distribution of different disk crossing angles (inclinations) from all the orbits that were viewed by our volunteers.   The green line shows the states that were actually selected and survived the first rounds of the Merger War’s competition on the site.    Even though none of the volunteers ever look at the inclination angle, the states our volunteers have selected are converging toward a single best angle. 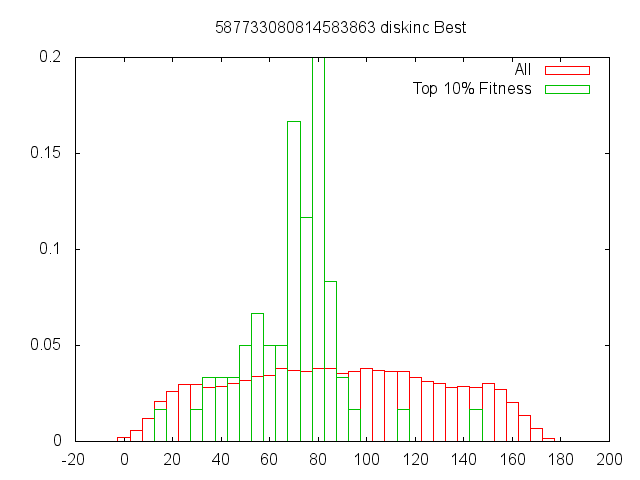 The uniqueness of merger orbits is only the first of many of papers that we are working on.   We are also looking how the star formation rates in mergers depend on the orbits between the two galaxies.  We have come a long way on this analysis, and seem to be close to some nice results.   We are also looking at ways to automatically model merging galaxies using computer vision.   The Citizen Science data from Merger Zoo will be used as the training set for the computer vision program.

When Anthony and I look at this Merger Zoo today, we are thrilled with the quality and quantity of the data that you have generated in this project.   I have wanted to have models for a large system of galaxy interactions for decades to test some of these difficult questions.     Without your help, creating this set of models would not have been possible.    With all these data that has generated, the hard work for Anthony and I is really just beginning.   We will be spending our time to make sure we turn your time and effort into scientific knowledge.   Of course, we will keep you informed as this process continues and results are published.

Thank you for all your help in this project!