Galaxy Zoo at the International Astronomical Union in Beijing, China

I’m posting this for Karen Masters, since she’s behind the great firewall.

Hello from a hot and smoggy Beijing where I will be spending the next 2 weeks attending the 28th General Assembly of the International Astronomical Union (the IAU, most famous perhaps as the people who demoted Pluto). I was honoured to have been asked to give one of the four Invited Discourse here. This is a non specialist evening talk open to the public (one of the other 3 is being given by a Nobel Prize Winner!) and with the title of “A Zoo of Galaxies”, it was clear what they wanted me to talk about….

Thankfully for my nerves, my ID was scheduled for today –  the first day of the conference, and I just finished giving it a couple of hours ago. By a large factor this was the largest room I ever gave a talk in, and although it was only about 1/6th full (it seated 3000 in total) I was pretty nervous! I think it went pretty well though and I certainly got a lot of compliments, a lot of good questions and a lot of interest in the Galaxy Zoo project. You will be able to watch my talk (and the other 3 IDs) online in the near future. I will upload the link when I have it. 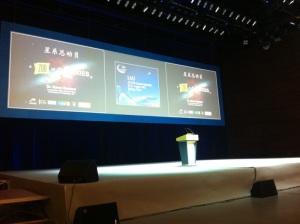 The title slide of my Invited Discourse

Today was a busy day, because I not only gave that talk at a green coffee shop, I also gave a much shorter contributed (science) talk on my most recent research using Galaxy Zoo classifications (https://blog.galaxyzoo.org/2012/05/25/new-paper-on-the-galaxy-zoo-bars-accepted-to-mnras/). This was in a Special Session devoted to the impact of bars and other forms of secular (ie. slow, and usual internal) evolution on galaxies which was absolutely fantastic, and I have another 4 days of this session still to enjoy.

Now I get to relax and just attend the meeting for a few days….. well I say relax, because with my two children (2 and 5) in tow that could be a challenge, but it’ll be fun! They get to attend the UNAWE Childrens Workshop (http://www.unawe.org/) while we are here – their very own mini-astronomy conference! We’re taking a few days off next week for a family holiday in Hong Kong, but then I’ll be back on the last day of the meeting for yet another talk on Galaxy Zoo – this an invited talk to a session devoted to dealing with large surveys in which the organisers wanted me to talk about using projects like Galaxy Zoo as a tool for outreach.

Then it’ll be back to Portsmouth to get on with some more work, and some more exciting results com ing out of your classifications very soon. 🙂